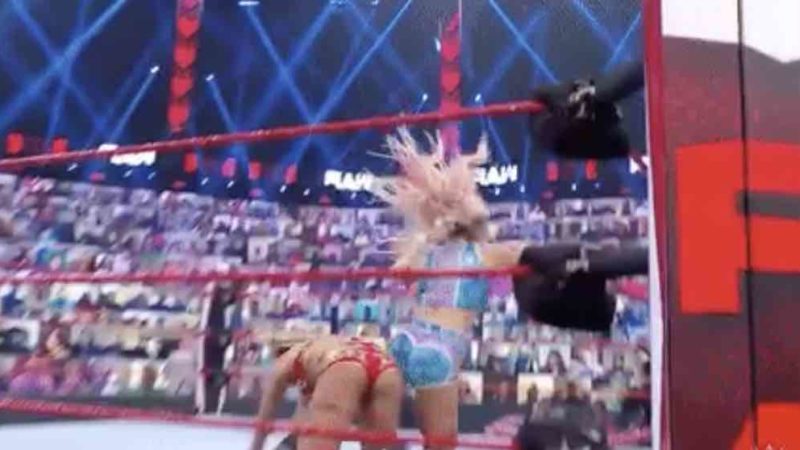 They say that anything can happen in the WWE and that wasn’t any less true during a match during this week’s WWE Monday Night Raw. The match, which was planned contest between Dana Brooke, the tag team partner of Mandy Rose facing ‘The Queen’ of WWE, Charlotte Flair. During the match, Charlotte was going for a cartwheel attack where Brooke would then neutralize her opponent by attacking her legs mid-flip. You can view this below. This Dana Brooke ‘wardrobe malfunction’ was recently revealed.

In other news regarding Charlotte Flair, the former WWE Raw Women’s Champion was a subject of Tamina’s thoughts during a recent apperance on the ViBe and Wrestling podcast. During the interview, the daughter of the late ‘Superfly’ Jimmy Snuka recently named Charlotte Flair as the ‘Roman Reigns’ of the WWE Women’s Division. Roman Reigns is the current WWE Universial Champion and ‘The Head of the Table’. Credit to RingsideNews for the below quote.

“I would say probably Charlotte Flair [is the Roman Reigns of the women’s division] at this point. She came back and then she definitely got something on her head. She is coming back for something and wants to prove who she is. She just came out and put everybody on the spot and now she addressed all the locker room, so I would have to say probably Charlotte right now.