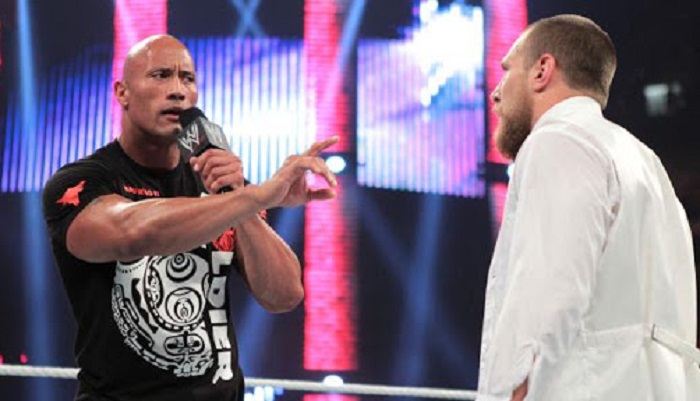 Daniel Bryan calls out The Rock

Daniel Bryan is interested in quite a high-profile showdown in WWE.

Bryan, who along with Brie Bella recently introduced his second child with The Bella Twin to the world, took to social media on Thursday to tease a potential match against future WWE Hall Of Fame star and one of the new owners of the XFL, Dwayne “The Rock” Johnson.

“I would love to do a match with The Rock based solely on how many times my daughter has made me listen to ‘You’re Welcome,'” wrote Bryan on his official Twitter page on Thursday morning. “And then of course it’s stuck in my head and I sing it all day.”

The tweet has garnered a lot of engagement from the wrestling community on Twitter, with “Road Dogg” Brian G. James and Brian Myers even chiming in with replies.

“Every match need a story,” wrote Road Dogg in a reply to Bryan’s tweet. “This is a really good one! I plan on fighting Elsa at SummerSlam.”

Myers responded by writing, “Oh that was Maui just messin’ around.”

Check out Daniel Bryan’s tweet about his interest in a potential match against The Rock, as well as the replies from Road Dogg and Brian Myers below.

Every match need a story. This is a really good one! I plan on fighting Elsa at SummerSlam

Oh that was Maui just messin’ around.