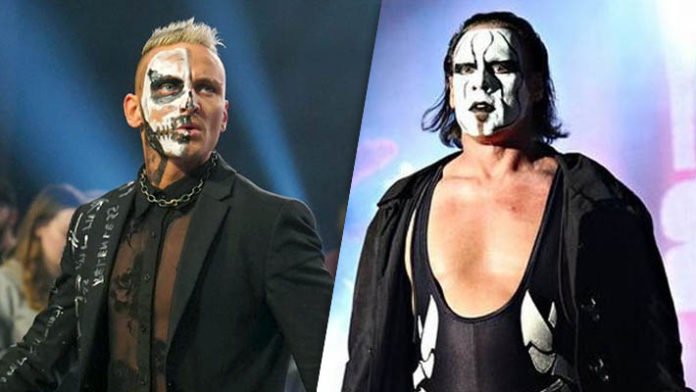 During the 90s Sting took a huge break from WCW television as he dropped the Surfer Sting gimmick. He came back as the Crow-inspired version of Sting, which is his most popular gimmick till date. Darby Allin has been compared to several wrestlers and that includes the Crow version of Sting.

Allin spoke to TV Insider, where he talked about him being compared to Sting’s darker version. He explained where the concept of his face paint comes from and that he has always been a fan of the gothic aesthetic in general. While he is flattered by being compared to Sting, it was not what he had intended at all.

My face paint just comes from my real life. That’s not really a character thing I try to rip off of anybody. I’ve always just liked the dark stuff. I’ve always been a fan of the gothic aesthetic. Just weird stuff. I’m flattered by  [the comparison], it’s cool, but it’s definitely not what I’m thinking about while I’m doing it.

Similar to how Sting used to observe from the rafters, Darby Allin sits in the seats at Daily’s Place as he observes what goes on in the ring. He is currently the TNT Champion and seems to be engaged in a feud with Team Taz.