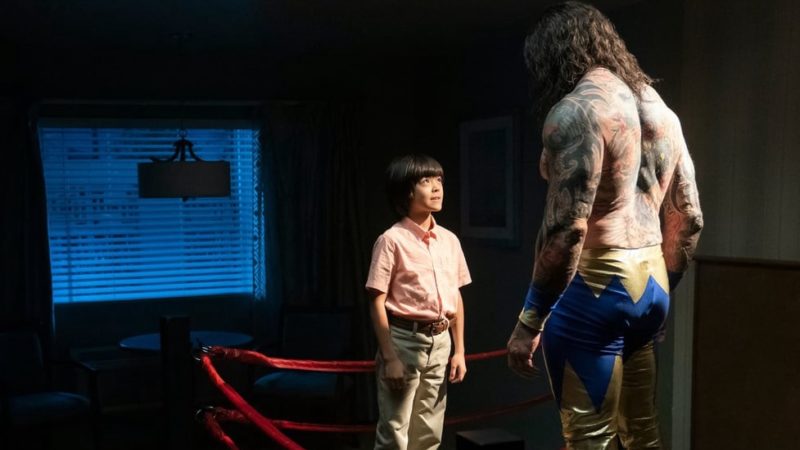 Dave Bautista recently spoke with Justin Barrasso of Sports Illustrated for an interview to promote his new HBO series, “Room 104.” The series premiere, which debuted on HBO on Sunday, August 9, 2020, features “The Animal” portraying a character named “Avalanche,” a retired former pro wrestler who was known as “Raw Dog Avalanche.”

During the discussion with Barrasso, Batista revealed he wasn’t originally interested in taking an acting gig that has him playing a pro wrestling-related character, specifically citing the amount of work he has put into keeping his acting world and pro wrestling world as far apart as possible.

Featured below are some of the highlights of the new Batista interview, which also features the former Evolution member revealing a funny behind-the-scenes story about Hulk Hogan thinking he was making fun of him on WWE television.

“When my agent told me it was a professional wrestling themed episode, I said, ‘Not a shot in hell.’ I’ve worked really hard to separate these two worlds.”

On working hard to be taken serious as an actor and turning down certain “obvious roles” for him to avoid being typecast:

“I didn’t leave wrestling to become a movie star, I left to be an actor. I’ve worked really hard to prove myself and earn the respect of my peers and audiences. This has not been the path of least resistance, it’s been a tough route.

On how his agent eventually got him interested in the role:

“One of my agents, Ryan Abboushi, said to me, ‘Just read the episode—it’s exactly what you’ve been looking for, it’s exactly what we’ve been talking about.’ I read the script and I was blown away. It wasn’t what I thought it was. It was deep and rich and emotional.”

“People have never seen me portray a role like this. There are so many layers to the character, and the subject matter is so sensitive. I’m excited for people to see the episode, but there is a huge part of me that is nervous about it. This was the opportunity I was waiting for. I’ve been searching for a role like this for a long time.”

On always being terrified of doing wrestling promos and how that ended up affecting his character in Room 104:

“Since the beginning of my wrestling career, I was so terrified to be on the microphone, so I’d subconsciously channel a bit of Hulk Hogan and the Macho Man [Randy Savage]. Even when filming Room 104, and it isn’t intentional, that’s who I channel. That is my first childhood connection to professional wrestling.”

On channeling Hulk Hogan when doing promos so much that years ago ‘The Hulkster’ asked him if he was doing it on purpose to mock him:

“I remember I did this interview years ago where it came across like I was doing this impersonation of Hulk Hogan. It wasn’t my intent but that’s the way it came off, and I remember saying, ‘This just isn’t me. I’m just not that guy.’ I later saw Hogan at a show and he asked if I was making fun of him. I said no, I didn’t mean that at all. That’s just my first connection to professional wrestling. They did promos a certain way, and it still impacts my work.”

Check out the complete Dave Bautista interview at SI.com. Featured below is the official trailer for “Room 104” starring Dave Bautista.