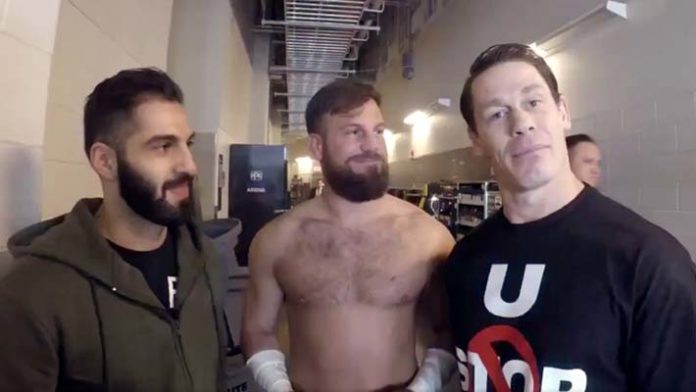 When WWE began airing no-crowd events from the Performance Center and Full Sail University, John Cena found himself sitting in the “audience” watching 205 Live. The 16-time champion has been a fan of the purple brand for some time now and has on more than one occasion championed the cruiserweight division.

Last night, @JohnCena got to do something he longed to do for awhile, watch @WWE205Live LIVE from the audience! #205Live pic.twitter.com/9dtynXAIuv

On the March 13th edition of the show, John Cena sat back to enjoy the ten-man tag team match featuring talent from both 205 Live and NXT. He was pretty excited to watch the boys do their thing live from the perspective of the crowd, something he rarely gets to do.

In a recent appearance on After The Bell with Corey Graves, Drew Gulak named a few Superstars that have helped him out during his WWE journey. Daniel Bryan, Cesaro, Kassius Ohno and Mike Quackenbush were among the list, as was John Cena.

I’ll be open with everyone in the locker room for situations and asking for opinions all the way up and down the locker room, but Bryan in particular has been a huge help lately. Just getting to chat with him and getting to know him, because it was only until recently that we’ve really gotten to know each other. We were acquaintances before and respectful colleagues, but now we’re building a friendship, so that’s kind of nice. Getting to pick his brain has been awesome.

Cesaro just because of our background and history, if I really need to be like, ‘What should I do in this situation?’ I go right to him. Same with Kassius Ohno. I go right to Mike Quackenbush and ask him what his opinions are if I need them, and any chance I’ve ever had to interact with John Cena, he’s been the most generous guy in the world with his time.

He really does love this, like he would sit and watch 205 Live every night after SmackDown just because he wanted to. He’d be giving out advice all the time. It’s like, ‘Oh, why didn’t I think of that?’