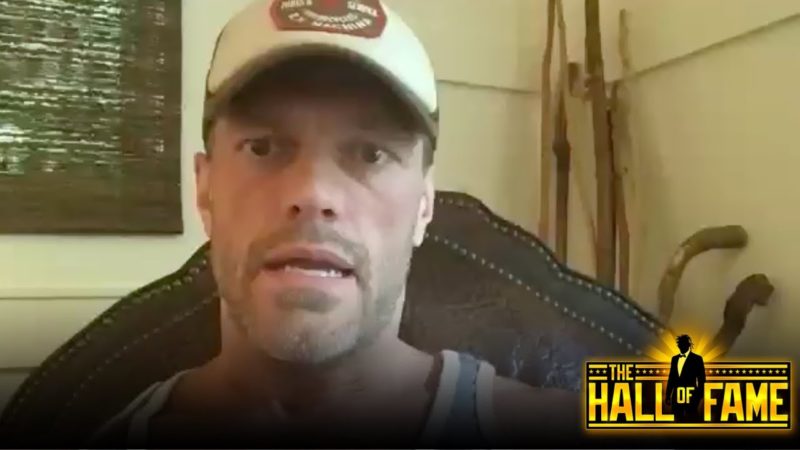 During an interview with Booker T on The Hall of Fame podcast, Edge revealed exactly how he tore his tricep in the ‘Greatest Wrestling Match Ever’ against Randy Orton:

“I did a springboard into the second RKO. I went ‘ooh.’ I got the cold sweats and I feel like I’m going to throw up. That’s usually a sign. That’s where it popped,” he said. “I thought, okay, I think I have a little bit more in the tank to finish this out. We got it finished.”

Edge said the bulk of the match was filmed at once but they did do a few pick-up shots after. In terms of the injury, he mentions that his fears were confirmed when he was assessed:

“I got to the back and I was like ‘I think something happened to my tricep.’ I don’t think it’s complete, but it feels like something. They felt around and they said ‘we think it might be complete.’”

His doctor mentioned that there was already an issue with it prior to the match and the Rated-R Superstar went into surgery shortly after:

“By the time I got the surgery, the surgeon said ‘you probably went in with it partially torn because the tissue was already very diseased.’ My elbow had been bugging me for probably about a month, but it would only bug me when I did chest or triceps.”

In terms of his wrestling future, Edge maintains he isn’t done yet but has come back for a very specific purpose:

“I want to finish it on my terms. I’m really stubborn on that in this run, I guess. I really want to, with this, try and show that selling still sells. I feel like that’s been lost. Don’t get me wrong, I’m guilty, too. You can watch the TLC matches and say ‘but, but, but!’ And I get it. I was young and I was there and I did it. I was always told by the Steve Austins, by the ‘Takers of the world, ‘hey man, if you just slowed down and tried this and that, and this and that.’ When I started doing that, that’s when I started making real money,” he contends. “I see stuff and I’m like, man, everybody is so athletic, so gifted, doing stuff that I couldn’t even fathom. I just want to try and show that if you did a quarter of that with all of those little things in between, now you’re painting masterpieces that will be able to be around for a while because you’ll have longevity this way.”

Check out the full clip here: