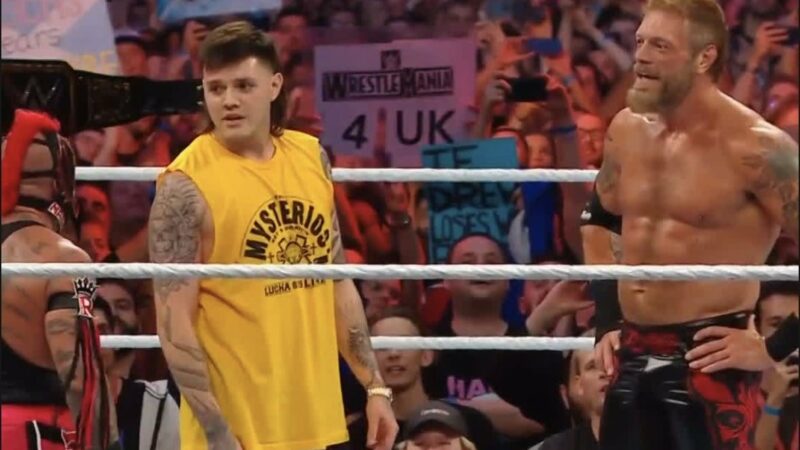 WWE Hall of Famer Edge recently took to his Instagram account and posted a picture with Rey Mysterio following their match at WWE Clash At The Castle. He penned a heartfelt note for the love that the fans have shown at the event. In the caption, he wrote the following about a shoe botch during the match:

Cardiff what can I say? You brought it. Energy, passion and fun. Literally dancing in the aisles at points during the night. When we get audiences like that it’s makes our job, which is already the best gig in the world, an absolute, mind and heart melting joy. Singing Metalingus word for word at the top of your lungs. I’ll never forget the love and I’ll take it with me wherever I go. Rey Rey and I turned the clocks back, at least a few years anyway, last night. Although shoes keep falling off during my matches apparently. A few surprises. They will be addressed. But that won’t take away what a magical night #clashatthecastle was, with one of my best friends. Thank you.

The Rated-R Superstar had teamed up with Rey Mysterio to battle Finn Balor and Damian Priest of The Judgment Day. Dominik Mysterio and Rhea Ripley were ringside for the match.

Ripley went on to assault beat Dominik down during the match outside the ring. The 25-year-old then tripped up Finn and it led to Rey hitting Balor with the 619. Edge followed it up with a Spear for the pinfall victory.

After the match, Dominik got into the ring with Edge and his father, as he shocked the fans by turning heel, the former SmackDown tag team champion hit the 11-time world champion with a low blow and then leveled Rey with a Clothesline, the sixty-plus thousand fans in utter disbelief. Edge sent out a Tweet to warn Dominik ahead of Monday Night RAW.

Cardiff. The UK. Thank you. Tonight you gave me something that will live in my heart forever. I think you can see what it means to me. We’re in it together. And I got to pay respect to Rey and be a luchador for a minute. Ok, now that I got that off my chest. See ya Monday Dom. pic.twitter.com/3MMkG2tQKe