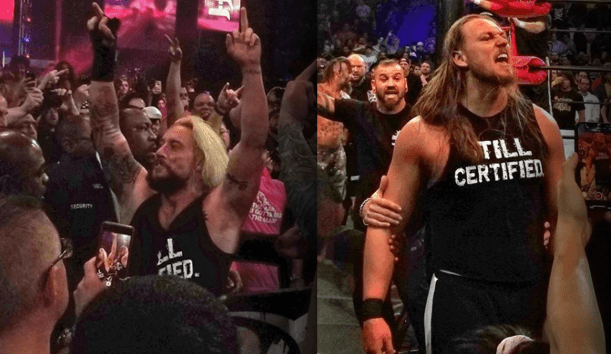 Enzo Amore isn’t welcome at WWE events due to the trouble he caused during Survivor Series last year. It seems like he isn’t done stirring up trouble even now.

The G1 Supercard took place at Madison Square Garden and that’s why the WWE Hall of Fame took place on Saturday. The unthinkable happened, as Enzo Amore and Big Cass invaded the event.

Enzo Amore jumped the rail at the G1 Supercard show during a match for the IWGP Heavyweight and Ring of Honor Tag Team Championships, but it didn’t go as planned for him. He was knocked down by Bully Ray and when Big Cass tried to provide assistance, he was knocked down as well.

It didn’t seem to be a legitimate attack and most likely was a work. They were led out of the arena by security afterwards.

Ok so… Enzo and Big Cass just invaded ROH and disrupted the post-match celebration for G.O.D. No, I’m not working you! WTF did we just see?! #G1Supercard pic.twitter.com/ib0xeGMQEW

The wrestling news site Voices of Wrestling claimed to have a source with Ring of Honor that revealed that the whole incident was a work, even though the broadcast didn’t show the attack during the match.

Just got a text. 100% work. Was told the upper level office pushed for it despite booking team being largely against it. https://t.co/XfPUueJgpt

We will provide updates if we get to learn more regarding this incident.