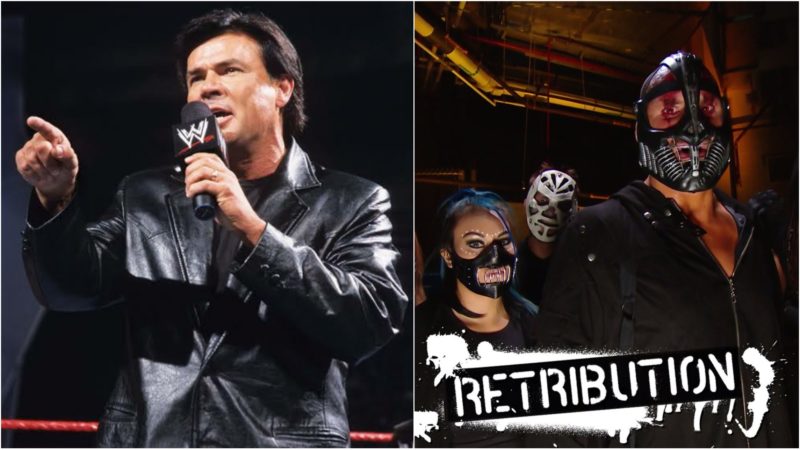 Eric Bischoff, the former WWE Raw General Manager has expressed his displeasure towards the RETRIBUTION angle.

On this past week’s edition of Monday Night Raw, the names of the three male wrestlers of RETRIBUTION were revealed. One of them known as T-bar has been harshly criticised by Eric Bischoff.

During a recent episode of the 83 Weeks Podcast, Eric Bischoff took a jibe at RETRIBUTION member, T-bar and the invasion storyline of the stable as well.

“By the way, what the f*** is a T-Bar? I feel for you. You’re new in the business, you’re greener than goose sh**, you’ve really not accomplished anything yet, and I believe you will. I’m not blaming you for the RETRIBUTION angle, I’m not blaming the writing team, but this is a f***ed up story.”

However, the 65-year-old, who was involved in nWo invasion angle back in the 90s, explained that he was not blaming the talent but the storyline.

“You can’t blame the talent; they’re doing the best they can. This is an opportunity for you, T-Bar, or T-Bone, or whoever you are. I get it. It’s not your fault and I’m not criticizing you, but, come on.”

“I support WWE. I have so much respect for the people there. But you gotta call it what it is – it’s the sh**s or it’s not.”

T-bar hurls back at Bischoff

T-bar, the member of RETRIBUTION was not silent about Bischoff’s remarks as he took to Twitter. He responded with a Tweet calling Bischoff as an “inspiration.”

Thank you @EBischoff. You are a huge inspiration for #RETRIBUTION! We too aspire to one day destroy a billion dollar wrestling company and bury it under fiery wreckage. pic.twitter.com/xGJXkdNzrc