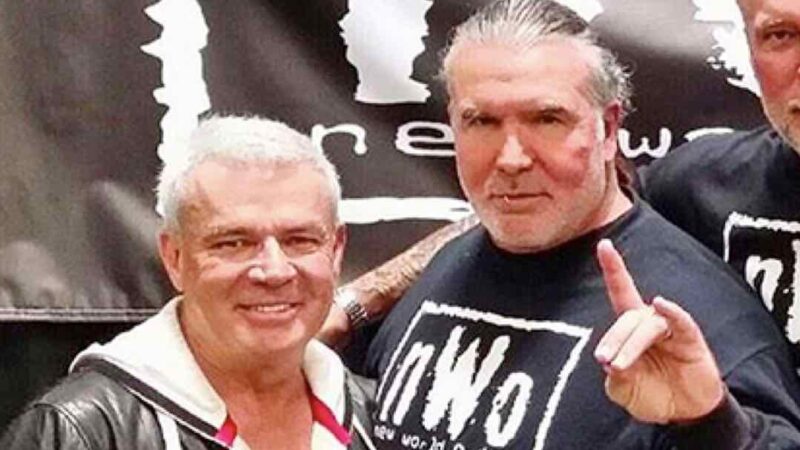 WWE Hall Of Famer Scott Hall is one of the biggest and most iconic names in professional wrestling, especially thanks to forming the nWo in 1996 alongside Hulk Hogan and Kevin Nash. He is a two-time Hall Of Famer as well after he got inducted in 2014 as Razor Ramon and 2020 as Scott Hall as part of the nWo.

Recently, Scott Hall was sent to the hospital after he suffered a broken hip due to taking a fall. According to Wade Keller at the PWTorch, Scott Hall is on life support after suffering three heart attacks. It was said complications arose after his hip surgery when a blood clot got loose.

Eric Bischoff took to Twitter and commented on Scott Hall being in life support, posting a classic photo from WCW Nitro. Bischoff sent his prayers for Scott Hall after getting to know about his condition.

We would like to give our best wishes to Scott Hall and pray that he makes a speedy recovery. Scott Hall reportedly looked unwell in a new video.

TMZ reported last week, “WWE legend Scott Hall is currently in a hospital after he suffered significant injuries in a fall … his good friend, Jerry Jarrett, announced this week.

Jarrett — a prominent figure in the wrestling world and the father of wrestling legend Jeff Jarrett — said Hall broke his hip in the fall and is currently recovering at a medical facility.”

“Just got off the phone with my friend Scott Hall,” Jerry Jarrett wrote on his Facebook page recently. “He fell and broke his hip and he’s in the hospital. Prayers will help him recover.”

Just heard about Scotts condition after wrapping next weeks podcast. Praying for him. https://t.co/P1bcPyVcbQ

During a recent edition of the 83 Weeks podcast, Eric Bischoff discussed the much-publicized Vince McMahon interview on the Pat McAfee Show. Credit to Wrestling Inc for the below.

“I’ve known Vince for [20 years]. Before that, I knew of him from a competitive perspective, but having face-to-face worked with him, having been in the ring with him, creatively, spent a cup of coffee there with him in 2019 and I was with him a lot, way more than I wanted to be,” Eric Bischoff said. “Vince McMahon has an electromagnetic force that surrounds him. That electromagnetic force is at such a high frequency, 24 hours a day that you can’t get through it.

“It’s very difficult to see the real Vince McMahon through this electromagnetic vail that lives with him. And I saw more glimpses of the Vince McMahon that I wish I had gotten to know during that Pat McAfee interview than I did during the combined times I spent with Vince McMahon over the past two decades. So hats off to Pat McAfee, amazing job and I enjoyed the hell out of it.”