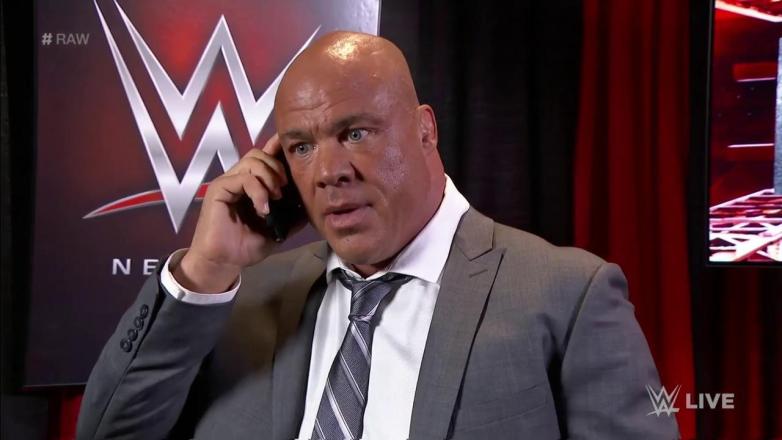 Kurt Angle has a secret and everybody’s going to know what it is on Monday Night Raw. The Olympic gold medalist has been getting strange text messages for the last few weeks and a couple of them have kept him from performing his GM duties. For some reason, Corey Graves has been getting the same texts and has been in on the fun. All kidding aside, Corey Graves has flourished during this story line showing a new side of his on-screen ability. Graves might have the kind of acting chops necessary to have to take a few months off to film a WWE Studios movie.

Eric Bischoff recently said on his podcast Bischoff On Wrestling that he knew what Kurt Angle’s secret is and who it is going to be. He was hesitant to reveal it but his co-host Nick Hausman finally pulled it out of him.

“Alright, I’m sure I’m gonna be burning a bridge with this one cause I’m not supposed to know about this. And hopefully, nobody gets into any trouble over this because sometimes leaks happen. Right?” Bischoff said.

Then Eric Bischoff said the planned mystery guest for Monday Night Raw is going to be none other than former TNA president Dixie Carter. Bischoff said they are “ripping off” TNA’s old story line with AJ Styles and Claire where Styles had an on-screen affair with a character played by a wonderful actress who really got the angle over with her incredible acting ability.

However, Bischoff remarked that Dixie Carter’s acting chops aren’t up to Claire’s as he began talking about how he thinks Dixie Carter will do in WWE.

“I know what her abilities are and what they’re not and I’m gonna try not to be a smart-ass here because I do like her. But I’m also gonna be honest about it. If there is an on-screen role for Dixie Carter in WWE I pray to God that they have a bunch of new producers who are really, really, really good and they have a lot of time on their hands”

Bischoff could have just been working the fans and pulling our legs, but why would he need to?

Credit for quotes goes to Bischoff On Wrestling