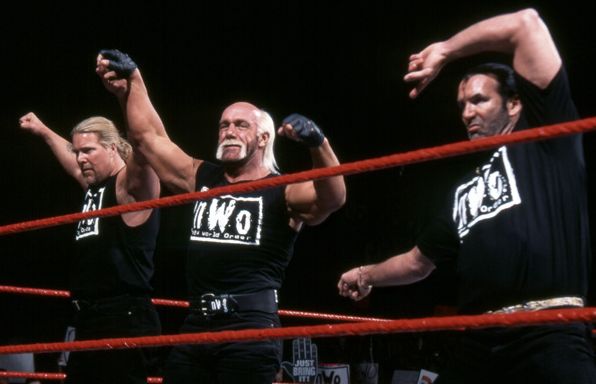 The nWo will be inducted into the WWE Hall Of Fame class of 2020. Hulk Hogan, Scott Hall, Kevin Nash, and Sean Waltman will be getting their second Hall Of Fame rings. However, there were many more members in the nWo than just them.

During  Talk Is Jericho, Eric Bischoff provided an explanation regarding the original plans for the nWo in WCW. He wanted them to be in complete control of WCW Nitro. This explains why there were so many members in the faction as he required a roster deep enough to put on a weekly show with nWo angles.

“The reason for that, good idea, bad idea, doesn’t matter at this point, but the reason for it was because the idea originally was to create this hostile takeover, this war between the nWo and WCW, and I wanted nWo to takeover the Nitro show, and I wanted WCW to have their own show on Thunder.”

“So in order for nWo to have their own show, and have their own roster to deep enough to sustain a two, or at some point a three hour show, there had to be more nWo members and eventually peel off and turn on the original nWo and all that kind of storyline gaga. But I was building up the nWo roster so I could eventually have WCW on Thunder, nWo on Nitro and have my two companies so to speak battling each other. Good idea, bad idea, doesn’t matter at this point, but that was the idea.”

The faction was unable to take over the show but was definitely close in some weeks.