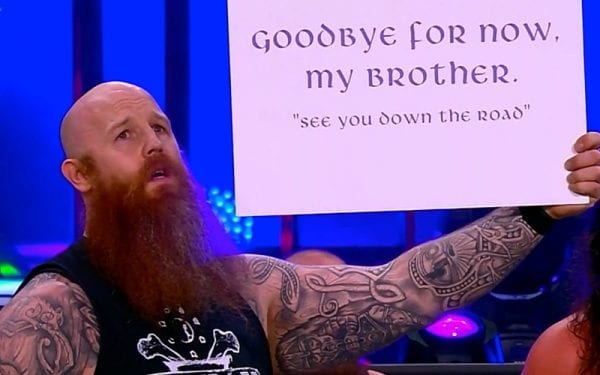 Brodie Lee’s former tag team partner Erick Rowan who is now known as Erick Redbeard made a surprise appearance on this week’s episode of Dynamite.

This week’s episode of Dynamite was a tribute show for the late star and it featured matches such as MJF, Ortiz & Santana vs. Alex Reynolds, John Silver & Adam Page.

Towards the ending of the bout, Inner Circle member Wardlow came out to help MJF and others but he was interrupted by a debuting Erick Rowan.

The former WWE star gave a chokeslam to Wardlow and ran him off to backstage. This allowed Silver and others to pick up the victory in the match.

Rowan then joined the Dark Order members for the post match celebration and he paid tribute to the former Wyatt Family member with a sign which read: “Goodbye for now my brother. See you down the road.”