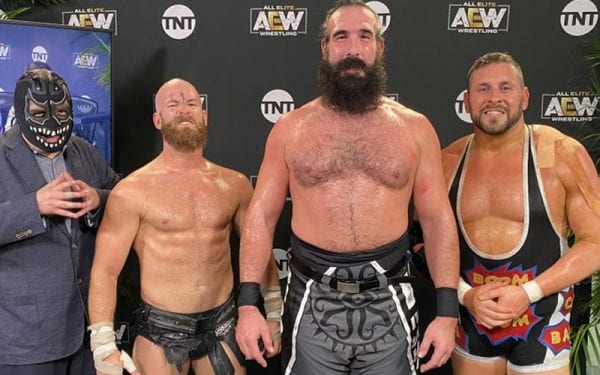 Evil Uno, a member of Dark Order stable in AEW recently joined Talk Is Jericho podcast. He spoke about the future plans of The Dark Order now that their leader, Brodie Lee faced a tragic death.

Uno believes that they will get through the tough situation and they have always been good at adjusting with the circumstances.

“I don’t think it’s something impossible. Especially with myself and Stu since we were Dark Order since day one, we’ve been through many phases of Dark Order. We had to adjust even when storylines were changing or things not working. Lockdowns, border crossings, people getting put in the group while not knowing who they were so I think we’ve always been good at adjusting. You have to right? You have to show that you’re multifaceted.”

Uno said that the group need to stay together and they would get better day by day in honor of Brodie Lee and they ‘encapsulate’ his legacy.

This year has given us confidence in the sense of I think we can pull through this. What does Dark Order do from here? Genuinely, I wish I could tell you. I wish I knew. Today, right now, I don’t even want to think about what’s coming up. I’m mostly thinking about Jon. I think the most obvious thing is we need to stay as a group in his honor. This is kind of wild because our cult group thing was, ‘Hey, you join this group, we’ll make you better.’ But now it feels like we have to become better wrestlers, better people for Jon. We now encapsulate his legacy.”

“His name is going to be attached to us forever, and anything from now on that is bad is not a bad thing just for us but also a bad thing to his legacy. So I feel like we have to produce the best content we have.”

It is to be seen what future holds for Dark Order.