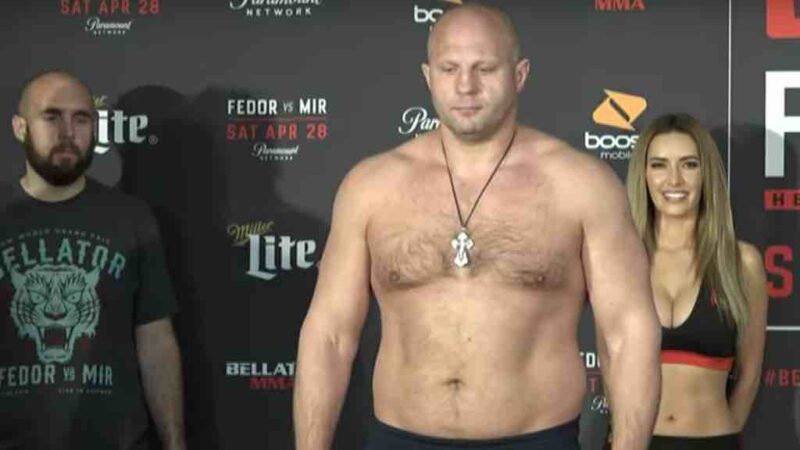 If The Last Emporer is looking for his last dance partner to share the cage with, he need-not look further.

All Elite Wrestling star and fellow Bellator MMA heavyweight contender, Jake Hager, appears to be actively campaigning for the fight against the returning MMA legend Fedor Emelianenko on social media.

Hager, 39, is a member of Chris Jericho’s “Inner Circle” faction in the Tony Khan-owned pro wrestling promotion, and sports an undefeated professional MMA record of 3-0-1, while Fedor, 45, owns an impressive 36-5-0 record after his 20-plus years in the game.

The former WWE Superstar known as Jack Swagger took to his official Twitter account on Wednesday, sharing details of a meet-and-greet he is scheduled to take part in alongside the Russian MMA icon, while at the same time drumming up interest from his fans for a potential in-cage meeting between the two.

Bellator MMA promoter Scott Coker noted in a recent interview with MMAJunkie.com that there are no shortage of options, as fellow heavyweight legends have already contacted him in hopes of landing the assignment of standing across the cage from Fedor when he returns to the fight game later in 2021.

“Believe me, there is no shortage of opponents (for) Russia right now,” Coker stated during the aforementioned interview. “Listen, the managers of all the free agents are calling. Josh Barnett was texting me today.”

Coker added, “I talked to (Junior Dos Santos’) manager a couple of days ago. Alistair Overeem. The list goes on and on and on.”

Whether not — we, the people — of the pro wrestling community could make a difference in Coker’s mind remains to be seen, however if the muscle behind the Inner Circle stands a shot at landing the fight, a bunch of comotion from the internet wrestling community can’t hurt!

Let your voice be heard by sounding off in our comments section below with your thoughts on a potential Fedor Emelianenko vs. Jake Hager bout in the Bellator MMA cage. You can also chime in via social media @WrestlingEdge.