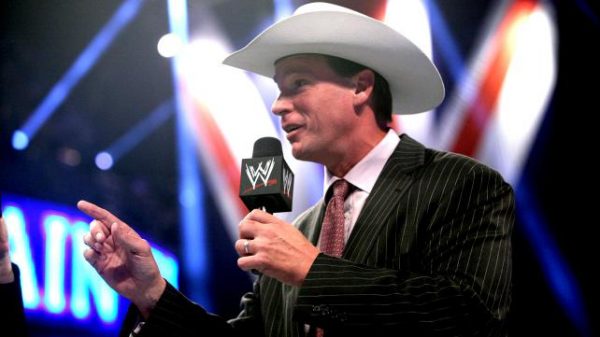 On the most recent episode of SmackDown Live, fans at the O2 Arena were reportedly chanting ‘Fire Bradshaw’. This incident comes in hot pursuit of yet another, where WWE fans were allegedly heard chanting ‘Fire JBL’ at a train station in London following Monday Night RAW.

WWE’s John Bradshaw Layfield has been in the eye of the storm as of late, with several current and former WWE personalities having levied allegations of bullying against the former WWE champion. JBL retired from in-ring competition in 2009, and has been a part of the promotion’s broadcasting team for quite some time now.

The 50-year old who prominently features as a color-commentator on SmackDown Live, has been accused by several pro-wrestling industry insiders of having bullied former SD Live employee Mauro Ranallo, eventually leading to the latter’s split from WWE. Besides, former WWE ring-announcer Justin Roberts has also revealed that he’d been bullied by the man during his time with the company.

Several fans as well as pundits of the professional wrestling community have called for John Bradshaw Layfield to be fired from the WWE, with fans chanting phrases such as ‘Fire Bradshaw’ and ‘Fire JBL’ at several WWE events ever since the aforementioned Ranallo’s sudden absence from the SmackDown commentary team. The most recent episode of SmackDown Live that took place at the O2 Arena in London, England featured more of the same- something that you can check out in the video below-

Furthermore, JBL added seemingly another nail to his own coffin, so to speak, on the most recent edition of Bring It To The Table, by stating that he’d rather be captured by ISIS than have dinner with Sami Zayn.

“I would rather be captured by ISIS than have to have dinner with Sami Zayn.” (JBL giving his thoughts on Sami Zayn)

JBL is said to have disregarded the fact that Zayn is a Muslim of Syrian descent, owing to which he ought to have exercised a tad more precaution while broaching the subject. This, in turn, has led to further backlash against him courtesy the large number of pro-wrestling fans on the internet. Our team at Wrestling-Edge wishes the best for all parties involved in this controversy and hope that the powers-that-be get to the bottom of this ‘alleged bullying’  saga.