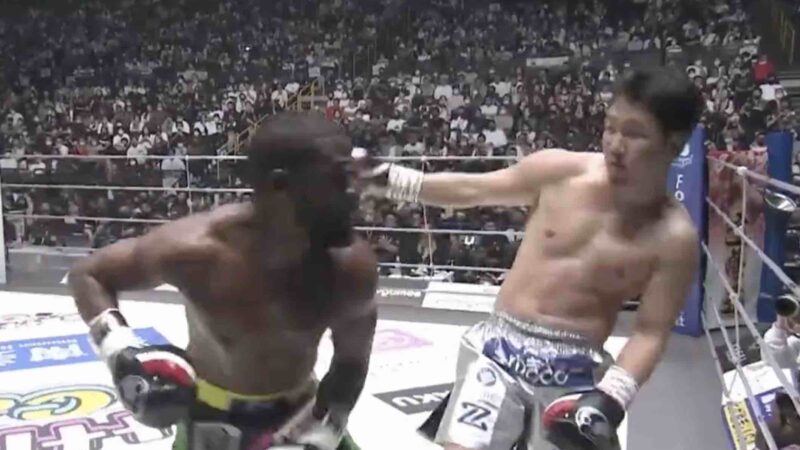 The undefeated boxing legend Floyd Mayweather recently locked horns with Mikuru Asakura in an exhibition boxing match. Asakur is a professional MMA fighter and popular YouTuber from Japan who endured the loss against ‘Money’. Asakura currently fights in the Rizin Fighting Federation and has a record of 10-2 with the promotion.

‘Money’ was able to defeat his opponent via a second-round TKO, and MMA journalist Chamatkar Sandhu took to Twitter to post a clip of the fight-ending highlight.

Although the fight ended with Mayweather earning a finish, many fans are claiming that the result was predetermined, as the knockout blow appears to partially land around the ear area, which the Twitterverse has deemed to be non-concussive.

“@SandhuMMA @arielhelwani I don’t even think he connected with that right hand. Watch it in slow motion.”

“@SandhuMMA The reason he fights in Asia is cause these mfs are paid to take a dive. This is just like wrestling entertainment.”

Floyd Mayweather knocked out Mikuru Asakura in the second round of their boxing exhibition bout 🥊pic.twitter.com/fTMr3kE97o

Chael Sonnen recently made some bold claims about undefeated boxing great Floyd Mayweather Jr. He claimed that Mayweather’s exhibition match in Japan is always fixed. Mayweather, who is retired from professional boxing had picked up his final win against UFC megastar Conor McGregor in August 2017 which saw him obtain a flawless 50-0 and he’s performed in three exhibition matches. The first of the bunch came as a massive surprise when Mayweather found his way into Japan-based MMA giant RIZIN Fighting Federation. In that December 2018 New Year’s clash atop RIZIN 14, Mayweather knocked out undefeated superstar kickboxing prodigy Tenshin Nasukawa in two minutes and 20 seconds.

Conor McGregor recently shut down the talks of a rematch with Floyd Mayweather Jr. after ‘Money’ teased a second fight with ‘The Notorious’ in 2023. McGregor, the former UFC featherweight and lightweight champion, posted ‘not interested’ in a since-deleted Instagram post (h/t The Mirror) that included a picture of his first fight with Mayweather in 2017.