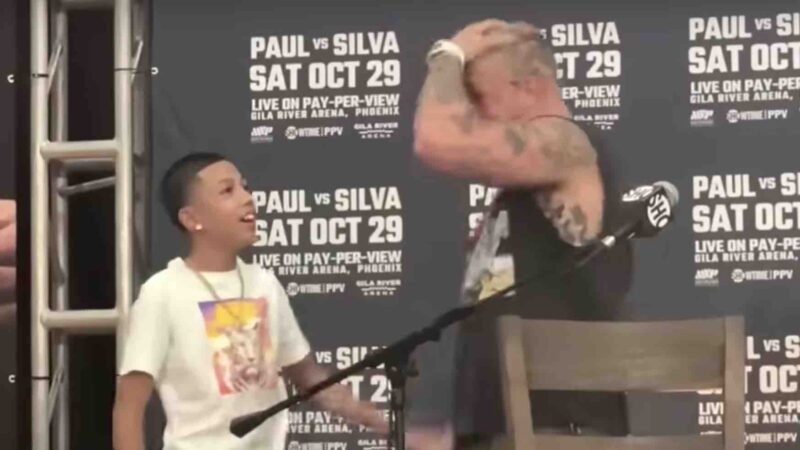 The YouTuber-turned-pro-boxer Jake Paul is set to face former UFC star Anderson Silva on October 29. During a press conference at the Gila River Arena in Glendale, Ariz, one of the fans had an opportunity to interact with ‘The Problem Child.’ In a video clip captured by Fight Hype, the 13-year-old fan named, David Garcia snatched the hat off of Paul while getting on the stage.

Jake Paul recently expressed his desire to fight Nate Diaz. The former UFC superstar completed his contract with a fourth-round guillotine choke of Tony Ferguson at UFC 279 this past Saturday. In his post-fight interview with UFC color commentator Joe Rogan, Diaz laid the foundation for his next venture and said he would ’show everybody how to own another sport,’ which led to speculation that he would shift to boxing.

Though he previously expressed interest in getting into the ring with Diaz, Paul knew it would not happen because the Stockton native was still under contract with the UFC. Now that he is a free agent, the YouTuber-turned-boxer has set his sights on Diaz once again.

“100 percent, I’ll slap the Stockton out of him,” said Paul when asked if Diaz was a potential opponent.

‘The Problem Child’ is set to lock horns with Anderson Silva, the former UFC middleweight champion and combat sports icon. Because he is considered the toughest opponent of his career thus far, Paul remains focused on the upcoming bout.

“I’m focused on Oct. 29,” said Paul. “I have a crazy tough opponent in front of me in Anderson Silva, so that’s my main focus right now.”

Silva is 2-0 since returning to boxing, earning wins over Julio César Chávez Jr and Tito Ortiz. Paul, meanwhile, boasts an undefeated record of 5-0, with wins over Ben Askren and Tyron Woodley (x2) among his highlights.