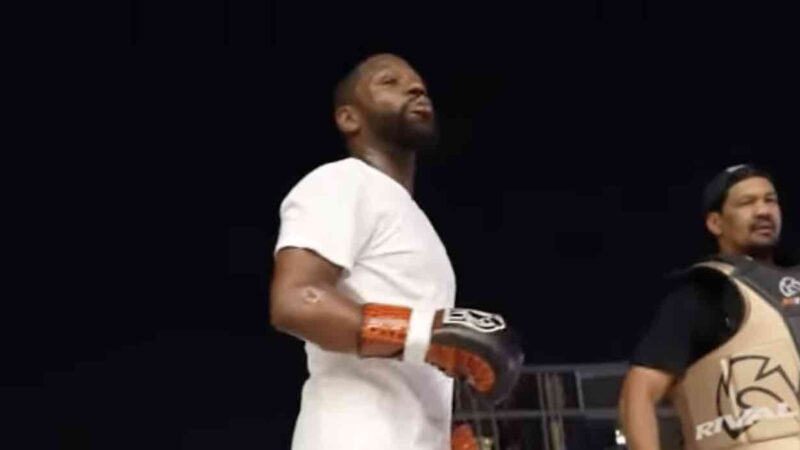 The undefeated boxing star Floyd Mayweather had issued a challenge for Anthony Taylor after the former MMA fighter taunted him from ringside during open workouts.

Earlier this month, Mayweather was the subject of a callout from Taylor, who’s set to box Jack Fincham, the winner of UK reality series Love Island. At a London-held press conference, Taylor gave a Jeremy Stephens-esque speech, claiming to be the “most qualified” fighter to be facing Mayweather.

‘Money’ had responded respectfully, wishing Taylor good luck with everything he’s doing, it doesn’t seem like “PrettyBoy” is giving up in his quest of challenging the boxing legend — just as long as it’s not on short notice at open workouts.

On Tuesday, Mayweather took to the ring in Abu Dhabi for his public workout. As he was hitting the pads, “Money” was distracted by a ringside trash talker who happened to be none other than Taylor.

The 50-0 retired pro laid out a challenge for Taylor, who’s well known to be a training partner of Jake Paul:

“You got your boxing stuff? Go put it on, let’s box,” Mayweather said. “I’m putting you on the spot.”

While Taylor initially appeared to accept the offer, he later returned and claimed he’s going to “save it” for his fight against Fincham on Sunday.

On November 13, at the Coca-Cola Arena in Abu Dhabi, Mayweather will share the ring with Deji, the brother of KSI, who holds a 1-3 record in the sport.