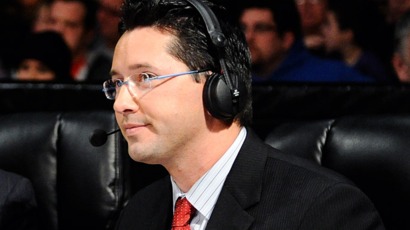 The UFC’s most recent pay-per-view (PPV) event, UFC 207, took place this past weekend (Friday December 30, 2016), and it featured the last broadcast that 20 year commentator Mike Goldberg would ever be a part of before going is separate ways with the promotion.

Much speculation has developed as to who might replace ‘Goldie’, but former WWE commentator turned ESPN broadcaster Todd Grisham took to Twitter to announce that he has landed a job with the UFC:

Just changed my twitter handle to @GrishamMMA. 2017 is going to be a great year!

Grisham’s college, and MMA Insider, Brett Okamoto confirmed the news himself while congratulating Grisham on the opportunity:

Congrats to my good friend @GrishamMMA, who will be making his debut on the desk with UFC next week in Phoenix. Excited for you, pal.

It is not yet clear if he will be taking over Goldie’s full time role, or if he will only be working smaller events, but we’ll keep you updated….