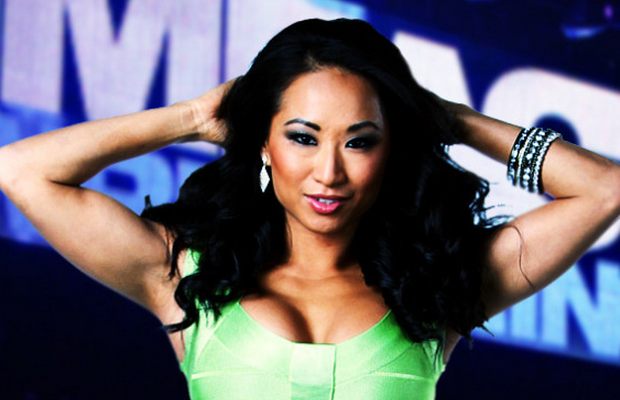 Former WWE Superstar Gail Kim recently joined Busted Open Radio to discuss her time in the WWE and the industry of pro wrestling. Here are the highlights:

On who she thinks is the best female in the industry today:

“Charlotte Flair definitely. I don’t watch a lot of wrestling right now because number one there’s an overabundance of it, I can’t keep up. I pretty much keep track of all wrestling through social media, which has been great, and so I watch bits and pieces. If I talk about people having a great match then I have to go watch it. That started happening when the NXT girls were doing their thing, you know The Four Horsewomen, and I remember watching a four way with those girls and thinking ‘Who stands out to me?’ And Charlotte actually didn’t stand out to me back then. I thought she was solid, I thought she was athletic, and then the way that she’s progressed over the years just in her confidence, her year, everything is just now the complete package. And mind you, since we’re in the business we hear about people and their work ethic, their personality, whether they’re well liked or respected, and that usually factors into everything. And Charlotte, everyone will tell me she’s the hardest worker. And I can respect that. I met her for the first time maybe two months ago, so sweet, really great girl. I love that she has hard shoes to fill. The people that come from, especially successful, second-generation talent, it’s just hard to fill those shoes of their fathers or mothers. She has done an awesome job. That would be a dream match for me as well.”

On if she and Charlotte wrestled, would it be the best match of her career:

“It could be, yeah. It definitely has the potential to be. I’m not gonna like, I’m a little old. There are some girls that I would love to work with up there and Charlotte is definitely one of the. But I don’t know if that’s a possibility at this point. Where I am and where she is, so that’s too bad. I would love for that to happen, I think that’d be great. Her Figure Four, my Figure Four in the post. Who knows who’d win?”

On what’s next for her:

“My ultimate goal is always to make magic. I’m not retired, everyone always thinks I’m retired, I was injured. But hey, I’m 40-years-old, I don’t wanna be decrepit, I don’t want the fans to think of me in any way of being slowed down, which I’m not. That’s why I’ve taken my time coming back. I’m sure at some point I’ll retire but I don’t know when that is. Then, I’m already at the point where I’m helping the girls and I feel that’ll be my natural transition. I don’t know, we’ll see. I’ve always been that spontaneous, go with the flow, I don’t turn any great opportunities down whether it’s in our out of wrestling. I’m an opportunity grabber.”

On a possible WWE return:

“I will say never say never. Number two, my loyalty is always with Impact Wrestling to tell you the truth. But never say never, and if that was the case, if I ever had to or did go back and get that opportunity, I would be myself. Because at this point you have nothing to lose, it’s like whatever. If you can’t accept me for who I am, f*ck it.”