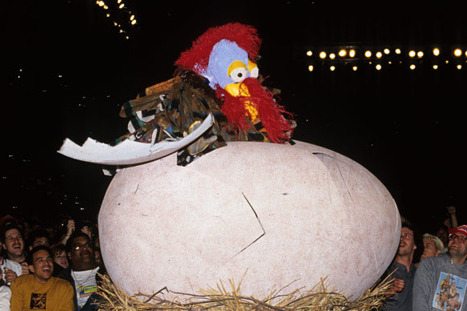 Former WWE Superstar Hector Guerrero (a.k.a. The Gobbledy Gooker) was recently interviewed by Sports Illustrated. You can check out some highlights here:

On debuting as the Gobbledy Gooker and how long he was in the egg:

“The Gobbledy Gooker is called the biggest flop in professional wrestling history, but it wasn’t meant for the adults. It was for the children. Vince wanted to do something noble, which I take my hat off to and respect. But the circumstances were not favorable. I couldn’t see. The eyes were outside and they were bubbled out—it was almost like they drilled holes through golf balls.

“I had to get in the egg early before the show. There was a box under the egg, and I had a fan down there to keep me cool. I had a light, I had a monitor, and that’s where I was. As soon as I came out, you heard the boos—the real bad ones, and a lot of them. Gene Okerlund went through our routine, and he worked really hard, even going in the ring with me. I was flawless and didn’t miss a cue, but the stares and looks from the crowd made me feel like the biggest flop in the history of wrestling. That’s just the way the people reacted. I was in a bad situation, and you don’t blame the boss. You blame the performer.”

On appearing at Madison Square Garden two months after his debut:

“We went to Madison Square Garden two months after the Survivor Series flop. We shouldn’t have showcased the Gobbledy Gooker at Madison Square Garden. I came out cold turkey, and they told me they’d spotlight me when I walked out. The building went black and they shone the lights on me, and all I could see was white. I couldn’t see down, up, left, or right. I tried to feel my way to the ring. I handspringed into the top rope, but I couldn’t see the floor. I landed on my bottom, and then they finally turned the lights on and I went through my routine—cartwheels, high-fives, a little jiggle-jiggle-jaggle, and dances with the kids. I get back into the dressing room, and they were giving me the dirtiest faces. Vince wouldn’t even look at me and then he walked away. I started to undress, and Gorilla Monsoon walked in and said, ‘We finally figured it out. You couldn’t see, right?’ You think? Everything was wrong. They wanted to put me in a spot, but I was blind and couldn’t see.”