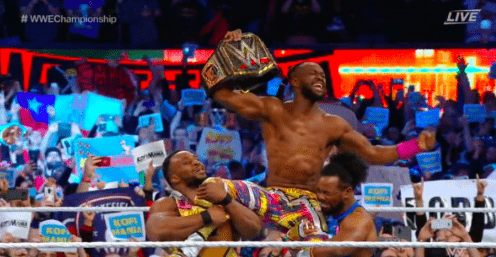 After 11 years of sacrifices, loyalty, and hard work, Kofi Kingston has finally made his climb to the very top. At WrestleMania 35, Kingston defeated Daniel Bryan and became the first-ever African American WWE Champion in history.

Kingston and Bryan went at it for quite some time with Bryan having the upper hand throughout the match. However, in the final minutes of the match, Kingston overcame Bryan’s vicious LeBell lock and delivered a triumphant Trouble in the Paradise for the victory, the title, and the history.

What's it like to have an army of 80,000+ supporters during the biggest match of your career?

After the match, the New Day joined Kingston in one of the most emotional post-match celebrations in WrestleMania history. Kingston’s children also joined him in the ring to celebrate their father’s historic victory.

HE. HAS. DONE IT!@TrueKofi HAS WON THE #WWEChampionship at #WrestleMania!!! pic.twitter.com/nrn2a8kSLm