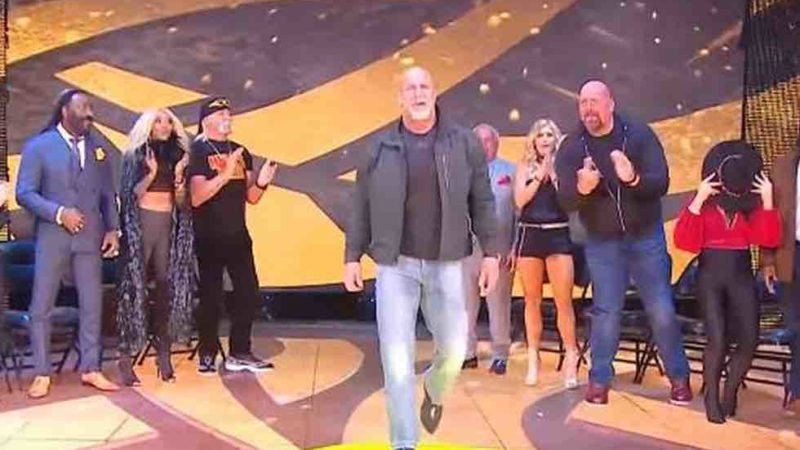 Last week’s episode of WWE RAW opened with Hulk Hogan delivering a promo about an H-Phone in an odd segment. On the other side of things, Legends night on RAW closed with Goldberg squaring off with Drew McIntyre and challenging him to a match. Goldberg shoved Drew down to the mat as the show ended, but the show was apparently supposed to be different.

According to Billi Bhatti of the Nitty Gritty Dirt Show (transcribed by Wrestling-Edge.com), the original ending of RAW was set to be different. The RAW show was supposed to end with Drew McIntyre and Goldberg in a pull-apart brawl. The legends, including the controversial Hulk Hogan, were supposed to pull away Goldberg, while the wrestlers pulled Drew McIntyre away.

“The show was supposed to go out with Drew headbutting Goldberg down to the floor. These guys were supposed to be pulled apart by people. The legends pulling away Goldberg and the main roster people pulling apart Drew.”

The other legends on stage like Ric Flair, Booker T, and Big Show, were supposed to be involved as well. Unfortunately, WWE missed the ending mark by a few minutes. According to the report, Drew McIntyre and Keith Lee had no signal to end their match and the original ending had to be canceled.

The show was reportedly disorganized and legends did not know the final plans days before the show.

“They lost six or seven minutes and no one can detect that loss. At the same time, Drew and Keith Lee at no point were told to go home. So, it was just a mishmash of disorganization from Hogan starting the show in the backstage ring, to Hogan having that stupid H-bomb promo that was awful, to the legends not knowing what they were doing, to legends not having any accommodation booked. It was finally getting around to organizing it to come, it all came down to Saturday and Sunday where they were finalizing the legends’ appearances.”