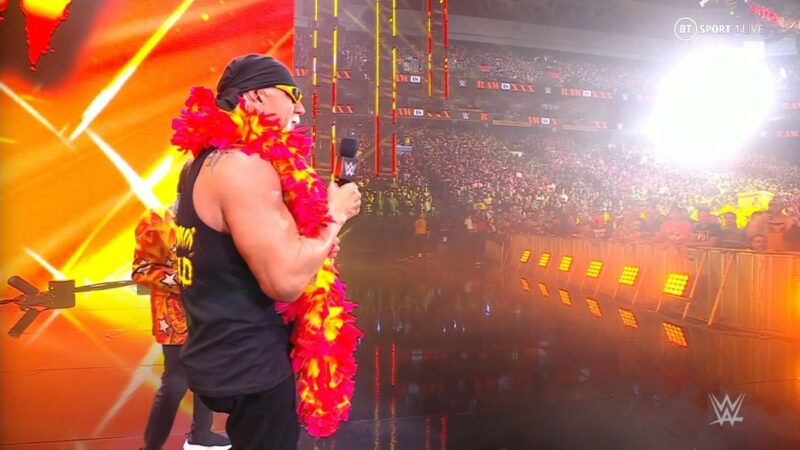 Hulk Hogan’s microphone crapped out on him on WWE Raw, leading to a major production botch. Hogan had to be given a new microphone, and some of his promo was inaudible.

#RAWisXXX opens with Hulk Hogan having a mic botch…

Back in 2019, Lance had appeared on the May 27 episode of WWE Raw, where he faced Shane McMahon as part of Shane’s feud with Roman Reigns. McMahon defeated Anoa’i and Reigns made the save when Shane tried to attack his cousin after the match.

Speaking on The Family Business, Anoa’i recalled how McMahon helped him feel comfortable before the match by talking it through with him. Anoa’i noted that the time for their match was cut back because Brock Lesnar’s “Boombox Brock” segment went long. As a result, Anoa’i’s spots were pulled from his math, but he was still excited to be on the show and featured in the prominent spot with Reigns.

“I was like, ‘Alright, what are we gonna do?’ Before we went, I knew Roman was doing a little feud with Shane and Drew and all them at the time. So I knew it might have been something with them, but I didn’t think it was gonna be an actual match. So yeah, once they tell us, and they pull me and Shane to go over everything, they tell us what we’re doing. Shane, man, he was honestly cool. We were sitting in catering together, talking, we were by ringside talking. He was just making me feel very comfortable to get in the ring with him, and just going over spots. He goes, ‘Oh, what do you want to hit? What do you want to do?’ I gave him all my ideas, which we had in.

“We had planned to go out there, so at first they gave us, I believe it was seven minutes they gave us in the ring, and it ended up being cut down to four because Brock Lesnar’s boombox, it was the day he did the boombox. That went a little too long, so they had to cut our time. It took out my whole shine, so all I got in was a dropkick. But that was cool, man. Just to be even in the ring on Raw and a great time, and then tapping out, and then my cousin Roman coming down to make the save, and just me and him in the ring was awesome,” he said.