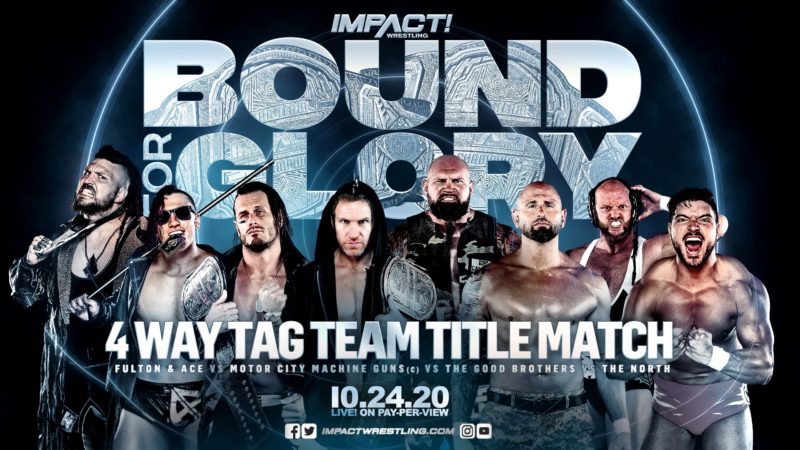 IMPACT Wrestling has received quite a lot of praise regarding their Knockouts and tag team divisions. Those parts of the roster have carried the company through a period where several top talents have left in the course of a calendar year.

IMPACT Wrestling’s tag team division has been on fire as of late, especially. The North, The Rascalz, Reno Scum, and more have helped carry it throughout the year.

As of late, though, The Good Brothers, The Motor City Machine Guns, and the newer team of Ace Austin and Madman Fulton have elevated the division.

The latest IMPACT ended with The Good Brothers, MCMG, The North, and Ace & Fulton brawling. It looks like these eight men will feature in the IMPACT Wrestling Tag Title match at Bound for Glory.

During the IMPACT Press Pass, it was revealed that the Guns will defend their titles against The Good Brothers, Ace & Fulton, and The North in a Fatal 4-Way Tag Title Match.

Below is the card so far:

Susie will challenge Deonna Purrazzo for the Knockouts Championship this Saturday at Victory Road on IMPACT Plus.

And you're going to get a little taste of #BFG2020 THIS SATURDAY at Victory Road as it'll be @The_Ace_Austin vs. @MachineGunKA vs. @fakekinkade vs. @Walking_Weapon!

Viewers of Victory Road will also see a preview of the IMPACT Wrestling Tag Title match when we see Ace Austin vs Josh Alexander vs Karl Anderson vs Alex Shelley.

Ahead of Bound for Glory, AXS TV will host an “IMPACT Week” which will feature programming from the company every night of the week leading up to the PPV.