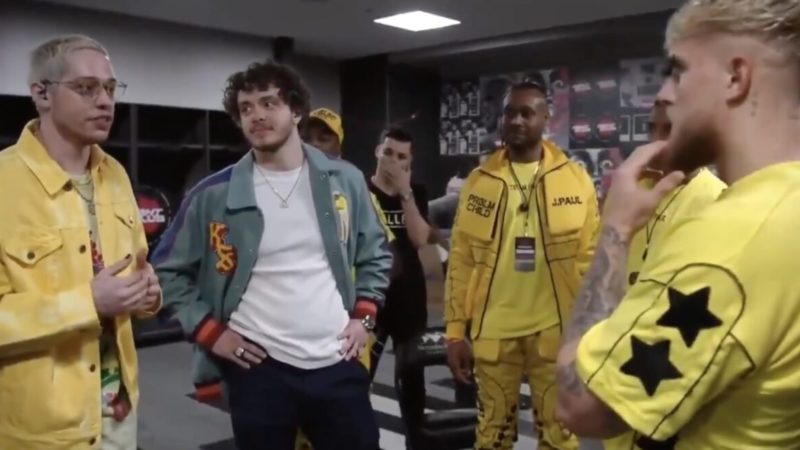 Jake Paul and Logan Paul are two names that have now crossed over into the world of pro-wrestling as we saw Logan Paul botch a ton of spots during WrestleMania, but I digress. Jake Paul supported Logan by stating that he was happy for him with the WWE move and that he (Jake) wanted to be John Cena. It looks like Jake is now stealing some spotlight from Logan as a new feud was started, but this time outside of the ring. Logan Paul Spotted With WWE Attitude Era Star?


Pete Davidson was recently at the boxing event that hosted Jake Paul vs Ben Askren. Pete Davidson was a host of the event for the night. While Pete thanked Jake for having him there while in the locker room with Jack Harlow and Paul, it seems like Jake may now have gone off the deep end on Davidson after Davidson dissed Paul before entering the locker room and then continued to do so throughout the night.

On the Impaulsive podcast, (as transcribed by Wrestling-Edge) Jake Paul stated: “It was my idea to have him (Pete Davidson) as the host of the event.” “F**k that guy. He won’t ever be a part of one of these ever again. He f**ked this sh*t up bro.”

Jake continued: “This is the problem with drama and shit, it brings everyone more clout.” “The sh*t he said, is sh*t you can’t take back.” Logan Paul said that Pete told him he wants to host more Triller PPV’s going forward.

The anger from Jake Paul comes from Pete Davidson stating things such as “Today is a really wild day for boxing because it shows just how low it’s truly sunk.” “I think today proves that if you have enough followers that you can truly do anything.” and Davidson was also shown speaking to Ben Askren about how horrible of a person Jake Paul truly is as Davidson took his deepest shot at Paul for sexual abuse claims.