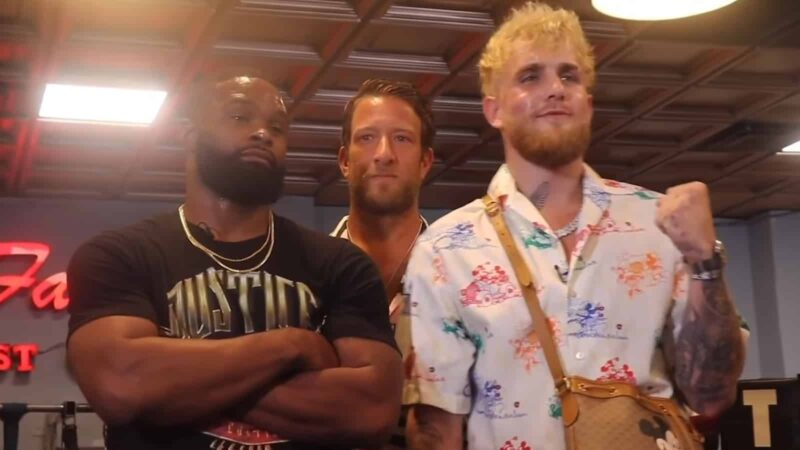 The YouTuber turned pro boxer, Jake Paul is set to take on the former UFC Welterweight Champion Tyron Woodley on August 28. Woodley recently spoke about the bout and wanted to make sure Jake will show up for the fight. Dana White ‘Suspends’ Top UFC Champion?

Jake recently got a win against Ben Askren and he is eyeing to continue his record when he takes on Woodley. While speaking with the Real Quick With Mike Swick Podcast, Woodley said that he has doubts if Jake will actually go through the fight.

“It was like one of those things that I’m scared to even post a lot of the training. I’m cutting some of the stuff that makes me look like a savage out because I don’t want him to get freaked out and be like, ‘Naw…oh, my leg hurt.’ That’s why I said we needed the anti-bitch clause.”

Woodley, who made his transition from MMA to boxing made it clear that he does not want Jake to back out of the scheduled match. That is the reason he spoke about adding the unofficial clause to their contract.

“So that’s why I’m trying to pressure him. So if he try to do that bullshit, I want the fans—hashtag, everybody that’s watching this—hashtag #AntiBitchClause. Don’t try to say you bust your hymen doing sprints. Don’t try to say you’re on your monthly. Don’t say none of that BS. Come and catch this fade. Don’t fake <coughs> corona. You probably drank the Clorox. I don’t wanna hear it.”

We will see who emerges victorious as the bout takes place on August 28.