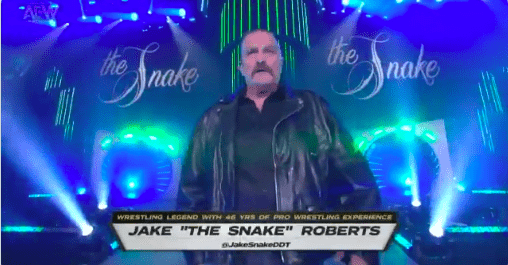 As seen on this week’s episode of AEW Dynamite, Cody Rhodes came out with a microphone to comment on his loss against MJF at Revolution. The EVP of AEW thanked the crew that put up the show together before the show came back on the air from a commercial break.

Cody then went on to call out MJF and asked him to say to his face that he beat the American Nightmare fair and square. However, the music hit and to everyone’s surprise, WWE Hall of Famer Jake “The Snake” Roberts came out.

Roberts cut a phenomenal promo about coming to AEW. Roberts said that he’s sick of Cody whining about MJF beating him and told him that he got his butt kicked at Revolution.

Roberts then walked out of the ring, leaving Cody and the fans shocked.

Are you excited to see Jake “The Snake” Roberts in AEW? Let us know in the comments below!