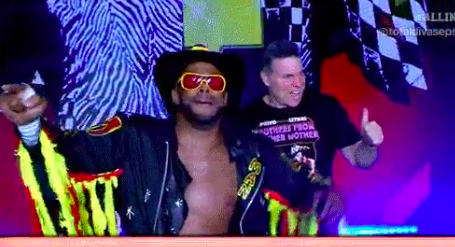 In his match against Flip Gordon for the Ring of Honor World Championship, Jay Lethal brought back his Black Machismo gimmick. For those unaware, Lethal becomes “Macho Man” Randy Savage when under the influence of the Black Machismo gimmick. The return of this gimmick was being built up in The Young Bucks’ YouTube series – “Being the Elite”.

The Macho Man’s brother Lanny Poffo was at ringside supporting Lethal who donned the gear of his late brother. The gimmick wore off mid-match when Brandi Rhodes hit Lethal’s shoulders but it came back again when Poffo decided to do the same. Lethal also managed to retain his title in this match.