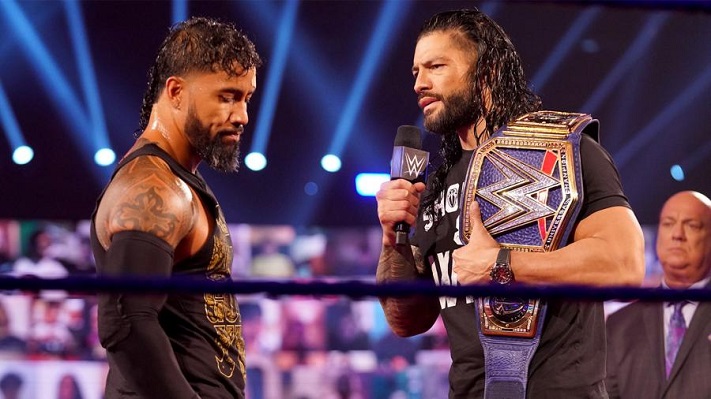 The recent intense feud between the Universal Champion Roman Reigns and his cousin Jey Uso has been well received, with fans and wrestling personalities both praising the storytelling of the rivalry alike.

The challenger in this contest Jey Uso recently had an interview with Gorilla Position podcast where he talked about a number of things and also revealed who is the mind behind this feud.

Uso attributed the storyline to the boss Vince McMahon and he revealed that people actually doubted the idea when the chairman originally talked about it:

“That old man is a genius for a reason, I’m pretty sure when he threw the idea out there, most of his team was like, ‘eh, we don’t know if it will work.’ However, it is working. There’s a reason this story is working and people are drawn to it. If it feels real to me, it is definitely going to come off real to the people,”

The former champion also spoke up against the belief that most WWE promos are scripted and revealed that the impactful lines that have made this feud stand out among other WWE rivalries have mostly been improvised:

“Not a lot of it is scripted. They can’t write our promos, they can’t write how we feel about each other.” said Jey Uso, “The cool thing is we’ve got to a level now where they trust us to do our thing. They’ve taken the chains off and we’re just going more and more at it every week.”

The SmackDown star then praised the work of the current Universal Champion and gave some credit to himself as well stressing that both of them are doing ‘the best work’ they have done in WWE.

The cousin brothers will meet once again inside the Hell In A Cell structure at the PPV of the same name this Sunday night. WWE has also announced that Roman Reigns will reveal “the consequences” of their upcoming ‘I Quit’ match during this week’s episode of SmackDown.