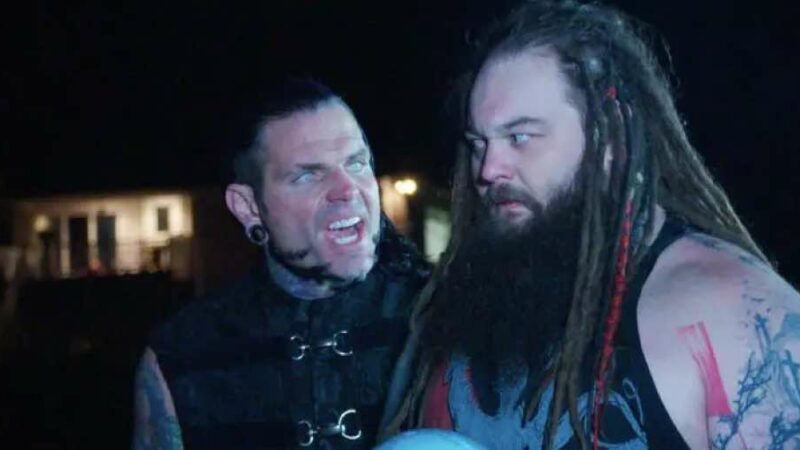 Jeff Hardy revealed on Matt Hardy’s podcast that he wishes he had wrestled Bray Wyatt, but it was stopped for a sad reason.

He said health issues and injuries blocked a feud. “Surgery got in the way,” Jeff said he’d have like a three-way feud with himself, Bray, and Matt. We’ll have to see if Bray comes to AEW and can make it happen.

Jeff Hardy also admitted to rejecting a WWE Hall of Fame induction offer, and he isn’t alone. WWE veteran The Undertaker had an incredible WrestleMania undefeated streak which was shockingly ended by none other than Brock Lesnar at WrestleMania 30. He scripted one of the most iconic moments in the history of WWE. ‘The Phenom’ recently revealed that he had turned down an offer to get inducted into the prestigious WWE Hall of Fame after that match.

WWE had wanted that the following year they would induct him into the Hall of Fame. However, Taker had other plans. He had suffered a concussion during his match against Brock Lesnar, so he has no recollection of his undefeated streak ending. Following the 25-minute contest, the legendary superstar collapsed backstage and had to go to the hospital. The WWE icon did not want to end his career on such a somber note.

Undertaker outlines the reason for rejecting the offer

Speaking to The Dallas Morning News, the soon-to-be Hall of Famer said he turned down WWE’s initial offer because he wanted to continue wrestling:

“This is the second time that I was invited to the Hall of Fame, so I wasn’t as shocked this time,” said The Undertaker. “I turned it down the first time because I knew I had unfinished business. I wasn’t at that place yet where I was ready to let go and say that it was over. This time, I’ve made my peace and I’m just honored and humbled that they would induct me.”

He also reflected on his WrestleMania 30 experience and explained why he did not want his career to end after the famous defeat:

“It was I wanna say after the Brock WrestleMania [when WWE offered a Hall of Fame induction],” The Undertaker continued. “Yeah, I think it was after that. In my head, I couldn’t end on a match that I didn’t remember. I got concussed and I don’t remember even having that match, so I wanted to at least have a match that I could remember.”

The Deadman is set to be inducted into the Hall of Fame by WWE Chairman Vince McMahon in Dallas, Texas on Friday, April 1.