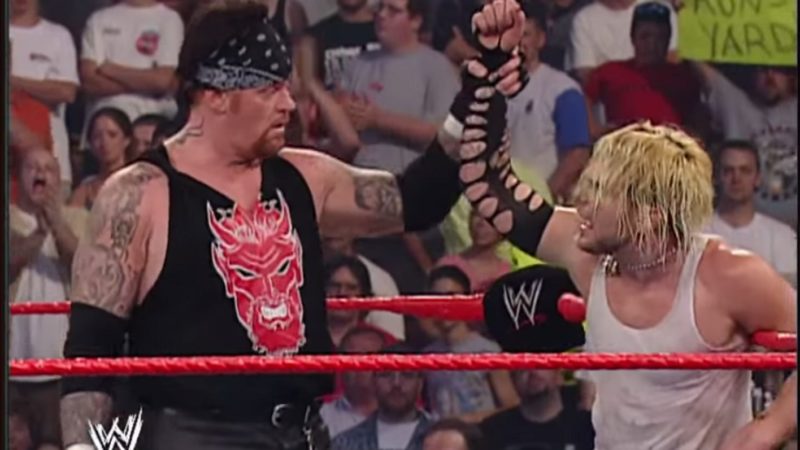 Jeff Hardy has become one of the biggest stars in WWE now but he was once helped by the WWE icon The Undertaker to cement his place in the company as a singles star during his early years.

Jeff Hardy recalls his ladder match with The Undertaker

During a recent interview with Stephanie Chase of Digital Spy, Hardy reminisced a ladder match against The Undertaker for the Undisputed Championship on July 1, 2002 edition of Monday Night Raw at Manchester, New Hampshire.

A week prior to that bout, the Charismatic Enigma had impressed The Phenom in a non-title match on Raw and that eventually led to the rematch for the championship.

ALSO READ: Another big title match made official for Christmas episode of Smackdown

Hardy is thankful to The Undertaker to help him establish as a singles star in WWE. He might not won the ladder match but he had earned the respect of the legend.

“Me being a young Jeff Hardy and going in there with the legend, the Hall of Famer known as The Undertaker, he’s pretty much like superhuman.For him to do what he did for me, I owe him so much. He helped me so much as far as what he did for me back then in that ladder match and I’ll never be able repay him.”

The Undertaker had his Final Farewell last month at Survivor Series. Hardy had painted The Undertaker’s symbol on his face to pay homage to The Deadman.

The Undertaker and Hardy last squared off at the 2009 No Way Out pay-per-view inside the Elimination Chamber for the WWE Championship. They had their last singles match on SmackDown back in November 2008.