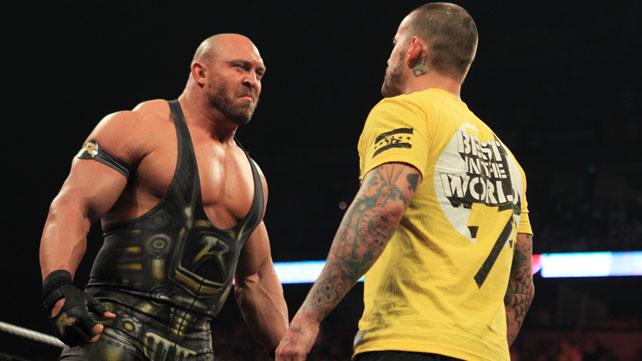 In an interview with Busted Open Radio, Jim Ross discussed CM Punk and his issues with WWE and Ryback…

On CM Punk’s money issues with WWE: “It was nothing I haven’t heard before as head of talent relations. There was a guy named Stone Cold, you might remember him who was gone for 8 months. He was angry over creative and money; he had a lot of negative things going on in his life and he needed a break, but he didn’t know how to create that break and we didn’t either; and it blew up. He went home and I remember sitting in my office. I sent him a card that said, “If you ever need to talk, I’m here for you.” He wasn’t going to call WWE; so he calls me, and I broker a meeting with Steve and Vince in Houston. And both of them wanted me to come to the meeting and I refused, because it needed to be the two of them, unfiltered and express themselves without an audience, I didn’t need to be there so I didn’t go. But they talked it out, they talked it through, and saw each other’s point of views, and Steve came back, made the company a lot of money, and WWE made good money and had a good ending except for a mother nature and the injuries. The whole CM Punk situation is a lot of miscommunication. It should have been addressed earlier. You can’t read a talents mind to see if they’re upset. WWE has a lot on their plate. And I don’t think it’s anyone’s fault, but at the end of the day the whole thing should have been addressed earlier, rather than be left as an open wound. I’m a CM Punk Wrestling Fan. I like Phil Brooks the guy. I haven’t talked to him one time, but he might put me as a “Wrestling Guy” although I’m more than a wrestling guy. I don’t wish him ill will and I’m not taking up for WWE. I’m not taking up for Phil. It’s just very unfortunate because they both needed each other in the world of pro wrestling.”

On what CM Punk said about Ryback and how the WWE locker room might feel about it: “I wish I could defend that answer and if I was there, I could do that, but you will find that in any other locker room. I heard Ray Lewis endorse Ray Rice…then you’ll have other guys who don’t want him on his team. You won’t find a unanimous decision on anything; which is why wrestlers won’t ever form a union. They can’t even form what they want to have for lunch or even stop for lunch when their on the road. Trust isn’t a big prominent thing in pro wrestling because they know their shelf-lives are short. Some guys will be very leery of trusting Phil because he brought up one of his own and shined unflattering light on Ryback, without any knowledge and based off how he looks. There will be a lot of guys alienated from that statement. Phil won’t care because he washed his hands of it. The guys who were Phil’s friends would probably just leave it alone. I think the whole thing could’ve been avoided if the problem was identified by both parties. The locker room is a very cruel place; and guys will lie to stir up a hornets nest especially when it comes to money; say a guy gets $50,000 for a PPV and they usually say they got $100,000 just to stir it up. I had a talent come up to me and said that I screwed him on his PPV pay out and I said ‘based on what’ and “I know guys that made double than what I made” and I knew that wasn’t true. So I made him tell me who it was and then I sent somebody after that person bring him into my office and said “Here’s the deal did wrestler A tell wrestler B make a 100 grand on the last PPV?” Silence. Then the wrestler said “I was kidding he should know I was kidding.” The locker room is a very cold place at times and it’s not the warm fuzzy all for one, one for all situations. Everybody wants the spot and there is only one big money spot. If this were the old territories days I would try to get Phil as a booker. He has a great mind and he has a great desire for the product and I could relate to that but the problem is there are no territories to book.”

On Punk’s match with Undertaker at Wrestlemania 29: “Back in the Attitude Era, everybody couldn’t be in the Main Event. They contributed to the success, but they can’t go on last. If you believe that you’re only the Main Event if you go on last, that’s not applicable, especially at WrestleMania and in my view, and I am a Undertaker mark and when that streak got going. It had more cache than the titles did because the titles weren’t hot. The title didn’t have the strong enough personal issue. I booked Austin in a tag match in LA and he calls me and complains about being in a tag team match and he said “I didn’t work my ass off to be someone else’s tag partner.” So you’re saying you want to work a tag match in LA. I have the greatest power in world and that was an eraser. Okay now you are not in a tag match. All I’m saying is that the CM Punk situation unraveled and people didn’t re-gather it and Phil made his mind up and when you feel your body is starting to give up on you and your physically hurting, you and your self-esteem starts to get hammered and depression starts to come in. I wasn’t there for the meetings but I just feel very badly because Phil Brooks deserves to be, if that’s what he wants, in the last match at WrestleMania. That might not happened but never say never. The second thing, when you’re using formulaic paying system that has been in the business for over 40 years, it’s essentially the same formula that has been in the business for all the territories. You are splitting up money and you are always going to have guys that are not happy with their pay off. I never had any talent say “Hey JR that was a great pay off for that last run and I really appreciate it.” I had tons of guys come up to me to talk about their pay offs. I said this on my podcast about the Hardy Boys and Bubba Ray Dudley coming to me about their TLC match saying they feel they were under paid for match. I went back to the Vince and he said” how you feel about it” and I went back to review it and I changed the pay off. Those guys had a hell of a match.”