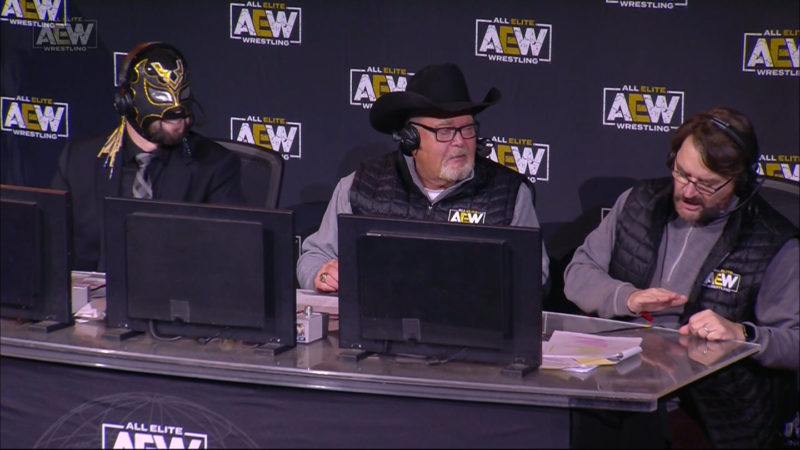 Jim Ross referred to AEW Dynamite as ‘WWE Dynamite’ after an emotional video played showing AEW’s best pandemic moments in Jacksonville, saying there was ‘nothing’ like ‘WWE Dynamite.’ It was one of his worst botches yet, after calling Kenny Omega the WWE Champion in the past.

JR specifically said, “There is nothing in your life that will top seeing a live WWE Dynamite.” Watch below.

JR tweeted, “Yep I apparently made an untimely error tonight at show’s end. No excuses. And I’m not quitting.”

Jim Ross telling us about #WWEDynamite instead of #AEWDynamite pic.twitter.com/Kjh3PNP4iA

JR called many of The Rock’s matches in WWE. The Rock is still regarded as of the most popular pro wrestlers in the history of the business. He has competed against the best of the best as far as the world of professional wrestling. This includes someone like Chris Jericho, who has had several matches against The Great One. Roman Reigns vs The Rock major spoilers were also leaked recently.

WCW, and AEW, legend Diamond Dallas Page recently spoke to The Angle Podcast, where he revealed that Vince McMahon kept rejecting the idea of him having a program with The Rock.

”Every single thing that I have ever said has happened, except for when I came up with the idea of People’s Champion versus People’s Champion. That’s what should have happened. Vince wanted me in that stalker thing because they wanted to beat the company [WCW] down.

I never thought that because, you know, it’s money. We’re gonna draw huge money, me and The Rock, but it wasn’t about that. It was like, ‘You guys bitch slapped us for 83 weeks straight.’ Now we’re not gonna put you over. And I get it, it was just business.”

The Rock vs DDP would most definitely have been a great storyline but it was not to be.