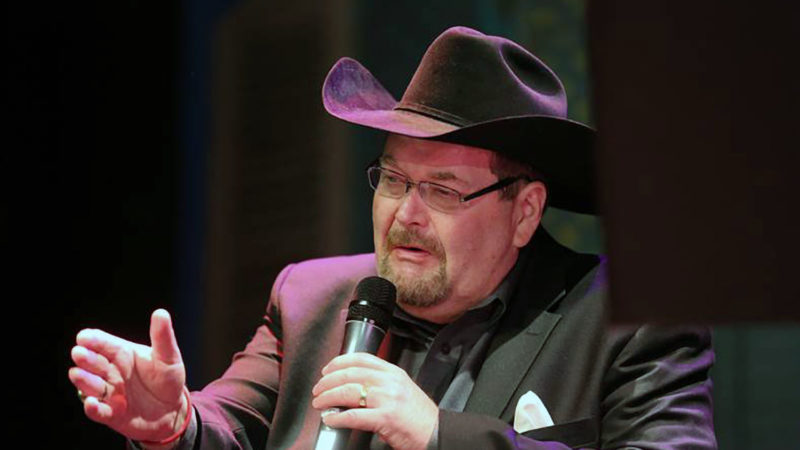 In this undated photo provided by Steve Wright Jr., Jim Ross speaks. Ross has gone down as one of the great broadcasters in WWE history and will bring his one-man show to Philadelphia in conjunction with the Royal Rumble. (AP Photo/Steve Wright Jr.)

Former WWE Announcer and Hall Of Famer Jim Ross has released another blog on his JR’s BBQ website. You can check out what he had to say here:

“Owens and Reigns worked hard, of which I greatly respect, and had a physical brawl loaded with unforgiving props. Seems to me that WWE is perhaps positioning Reigns to become a villain and if that is true Roman Reigns can be one of the biggest stars in WWE which is always the goal no matter if one is ‘fish or fowl.’ A great, ‘heel run’ will obviously do more for Reigns to be eventually become a major fan favorite than any thing that WWE can seemingly do at this time.

“If Reigns were to defeat Undertaker at WM in Orlando, it would propel Reigns to the next level of villainy and a star would be born one has to assume.”

On Samoa Joe not appearing in the Royal Rumble Match:

“Samoa Joe was a frequently discussed name being in the Rumble match but my theory on that is for a talent as highly regarded as Joe, creatively, I would have wanted Joe to make his debut by winning the Rumble match and that did not seem to be on the radar. There are better places (RAW or SDLive) to introduce new talents to the main rosters than the Rumble, IMO.”

On his RINGSIDE show during Wrestlemania weekend:

“Our next RINGSIDE Show is during Wrestlemania weekend,Saturday April 1 and Sunday April 2 both at Plaza Live in Orlando. The VIP meet and greets both days will start at noon and our show starts at 2:30 and wil be over by 4ish which gives everyone plenty of time to make Saturday’s NXT event and of course Sunday’s ‘Mania event. Tickets are available now including a limited number of VIP tickets for both shows at ticketfly.com. Tickets start at $25 while they last. ticketfly.com”