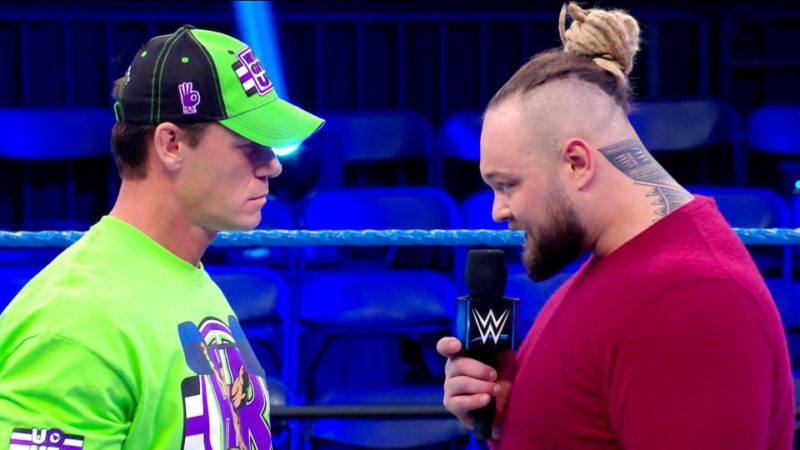 John Cena squared off against Bray Wyatt in a Firefly Funhouse match at WrestleMania 36. It was cinematic in nature and saw Cena losing against Wyatt in a match that was received well by fans and wrestlers alike.

In a recent interview with Den of Geek, Cena talked about the creative process regarding the WrestleMania match.

“That in its entirety, is a great example, of being given an idea, and then when you ask “Well what is this idea?” the response from those people that give it to you is we don’t know. So, what I love, I can waste the entire day, talking with you about, that performance. Because it means a lot to me and it’s one of those that it’s really special. But if anything, it’s a great example of, just not stopping and continuing to lean into anything and everything to tell the correct story.”

Cena revealed that no direction was provided regarding the match. Every time Cena and Wyatt asked about it, they were told by WWE creative that they were unaware what the plan was supposed to be.

“We weren’t given any direction. We were just given this thing, and then, we made this out of nothing because the response of all of our inquiries was always, “I don’t know.” So instead of taking I don’t know as like mopey complacency and going back and kicking the rock down the road, we took, I don’t know as opportunity. And trust me, man, when we were doing this, everyone involved was like “This is either gonna be awesome, or it’s gonna suck.” No one is going to apathetically watch this and go get popcorn. So it’s not like we knew we had something special.”

Cena also mentioned that everyone involved in creating the match had a feeling that the match would be a resounding success or a colossal failure.

“You talk to anyone who was involved in the process and the common theme was, “This is either going to be really good or it’s going to suck.” And we’re going to go down with the ship, but let’s not err on the side of caution, let’s be brave and let’s do something different. And if they don’t get it, at least we’ll know right away that they didn’t get it and we’ll know why because our audience is very vocal when they don’t like stuff.”

“Man, with the two performers involved we really could have sat on our haunches and done whatever we want and it would’ve been, okay it might’ve been just another match. But we all leaned into it and came up with some really creative stuff and in the process, used the forum to tell a great story. And that’s, it really was a cool thing.”

Cena said the match was very important to him as he had the desire to teach the next generation of Superstars and he revealed how “getting no information” is actually a blessing.

“And I say it’s important to me because this is uh, I also like to, help and teach and guide younger performers that are looking for answers. And for them to be like, “I get nothing. No one gives me any information.” They don’t realize that that’s a goldmine. Now I actually have multiple experiences, when I started rapping, for example, and the choices then, to even now of like, “Hey man, it happens at every level, you are not alone, Take it by the horns and do your best to make something our of it and don’t be afraid to fail.” And I really was happy with the effort and whether it bombed or it went to the moon, literally, I was happy. But I was so, I was also so happy that our audience understood what we were trying to say.”