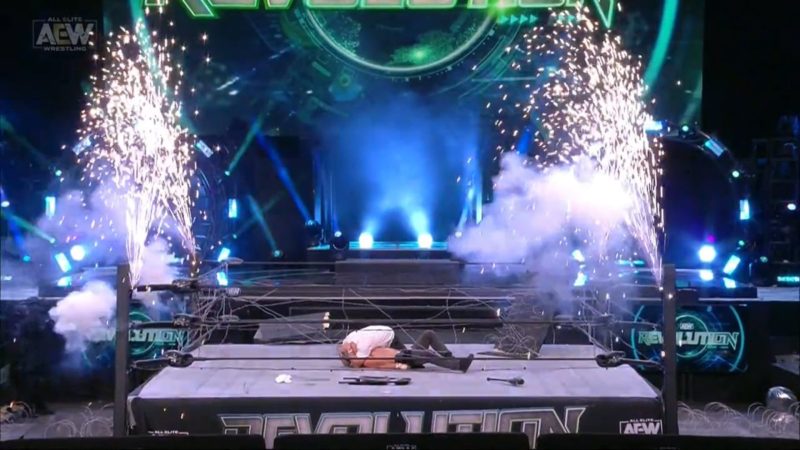 There was a countdown clock after the match and the ring was supposed to explode, and Eddie Kingston ran out to try to save Moxley. When the clock ran out, some sparklers went off, and AEW were widely roasted for a WrestleCrap worthy ending to their show.

A fan named Mikayla Mortimer even reported, “Mox is fully shitting on the finish of that match, no idea if it’s airing or not, but he’s the only one who could’ve cheered the crowd up for sure.”

NoDQ, “So… this was the grand finale of the final explosions going off. #AEW #AEWRevolution.”

WrestlingInc’s Zach Perez, “Well I’m sure every teenager has felt that at least once in their life, right? On the first go? Face with tears of joy #AEWRevolution
@WrestlingInc.”

WrestlingInc’s Raj Giri said, “Speaking of a fart in church, that ending… #AEWRevolution . It was still entertaining enough, but I thought it was the weakest AEW PPV so far
@WrestlingInc.”

Sean Ross Sapp tweeted, “Eddie Kingston should not be selling that. At all. Pivot. Adjust. Don’t do it.”

“I can’t put into words how lame that finish was. Woof.”

“No. That ending was terrible. If they didn’t have Eddie Kingston selling that, they could at least make the excuse that someone “cut the explosives.” That was a miserable finish.” Christian’s reason for quitting WWE for AEW just leaked.

So… this was the grand finale of the final explosions going off. #AEW #AEWRevolution pic.twitter.com/ANPETFHFP4