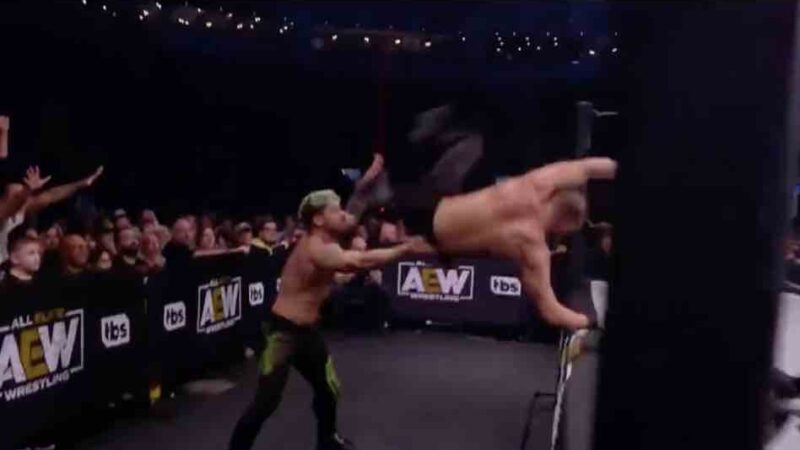 Jon Moxley botched a dive to the outside on AEW Dynamite in a tag team match with Bryan Danielson, aka Daniel Bryan. Moxley and Bryan won, and they were managed by William Regal.

WWE Hall of Famer Kurt Angle recently revealed that the departure of Brock Lesnar back in 2004 following his match against Goldberg at WrestleMania XX hurt the WWE Chairman Vince McMahon. During the latest episode of The Kurt Angle Show, he spoke about the build-up to the departure of ‘The Beast Incarnate.’

Angle revealed a conversation he had with Lesnar before he left the company, and said what he told the former UFC Champion that he could’ve changed the outcome of his WrestleMania match with Goldberg

“That’s when he told me about him wanting to leave. So he ended up contacting Vince and that’s what enabled Vince to decide that Brock would do the job. Vince already knew Goldberg was leaving, he didn’t know if Brock was leaving at this particular time but when Brock came home from that tour and told Vince, it hurt Vince, it stung.

Angle continued to speak about Brock’s departure and how Vince McMahon admired Brock at the time. He noted that the incident made him upset:

“Brock is one of Vince’s guys, he was one of the top guys,” Angle said. “He was only on TV for about 2 years but they pushed him hard from the beginning. Brock earned his spot and I believe that Vince was really upset when Brock decided to leave. Brock ended up going to the NFL and trying out, he made it to the final cut. He didn’t quite make the team and stuff happens. Him leaving, Vince was pretty upset about it.”

WWE Champion Brock Lesnar is set to face WWE Universal Champion Roman Reigns in the main event of this year’s WrestleMania 38 in a Title vs. Title, ‘Winner Takes All’, Championship Unification match. WrestleMania 38 will take place on Saturday, April 2, and Sunday, April 3 at AT& T Stadium in Arlington, Texas.