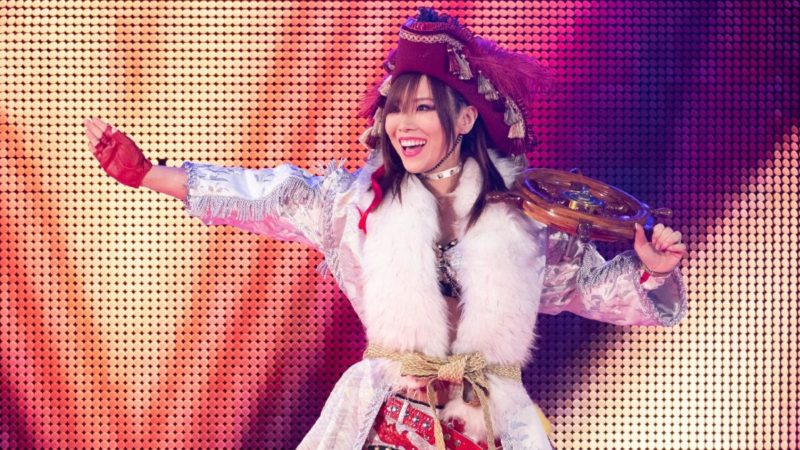 Kairi Sane is no longer an active in-ring performer. But she is still working with WWE in a different capacity. She completed her contract with the company in October this year. She now serves as an ambassador and trainer for WWE in her home country, Japan.

Unlike the rest of the sports and entertainment world, WWE did not shut down. Weekly shows and PPVs were produced as usual, but with no audience and limited personnel on premise.

Kairi Sane was one of the key performers for WWE throughout the COVID era. She competed in WrestleMania 36 with Asuka as the Kabuki Warriors to defend their Women’s Tag Team Championship. They lost the title to Nikki Cross and Alexa Bliss.

After this the Kabuki Warriors started a feud with the team of Sasha Banks and Bayley. It led to Sane being written off television eventually after a brutal backstage attack by Bayley. However, when not portraying her in-ring character, The Pirate Princess has nothing but good words for her formal rivals.

In an interview with Tokyo Sports, Sane showered Banks and Bayley with praises and hailed them for being the largest contributors in WWE throughout the pandemic. (H/t to DragonMoon-1222 for Japanese to English translation.)

Sane stated that both Sasha and Bayley proved to be among the hardest workers in the company during the difficult times.

They were involved in the creative work and offered to work overtime on both the main roster brands.

Sane revealed that Sasha and Bayley nominated themselves as the final rivals for the Kabuki Warriors before they were officially disbanded. Both Sane and Asuka appreciated that a lot as The Boss ‘n’ Hug Connection was the dream opponent for them every since they won the tag team title.

⚓️ #KairiSane reveals it was actually #Bayley & #SashaBanks who nominated themselves as the final opponents of #KabukiWarriors, which Kairi still appreciates a lot as they were always Kairi & #Asuka's dream opponents since Kabuki Warriors got the Women's Tag Titles.
(cont.)

Kairi Sane expects their Hell in a Cell match to be “brutal and emotional”. She is set to appear as a commentator for the Japanese broadcast of the pay-per-view this Sunday night.

Sane described Bayley as a ‘natural entertainer’ and someone with an ‘extraordinary passion for wrestling’. Sasha on the other hand exudes a ‘charismatic aura’ every time she steps inside the ring, she said.

She also revealed that Sasha gave her a set of crystals and healing stones as a parting gift when she left WWE – a present that she treasures.