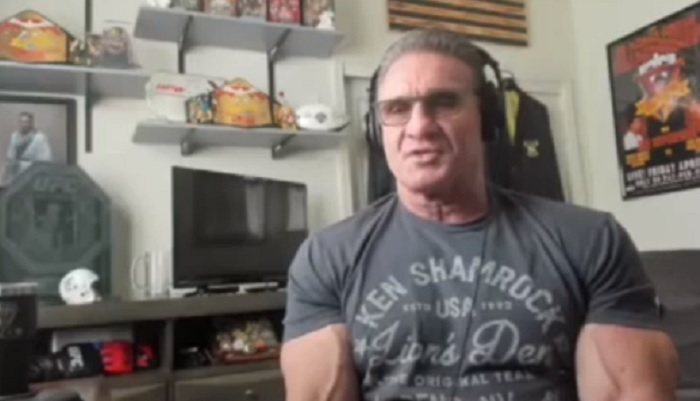 “The World’s Most Dangerous Man” Ken Shamrock recently appeared as a guest on The Angle Podcast to promote tonight’s IMPACT Wrestling Bound For Glory 2020 pay-per-view, as well as his upcoming induction into the IMPACT Wrestling Hall Of Fame.

Featured below are some of the highlights from the new Ken Shamrock interview.

On his signature Ankle Lock submission finisher being used as the finisher for Kurt Angle and Jake Hager:

“All of those guys have great minds. They know how to set that up and put it on at the right time to make the crowd pop. It’s not easy to do. It’s a shoot move, so it’s not something that’s easy to do. If these guys want to do it and learn it they have to just do it and do it live. Hats off to them. People always ask if I’m upset that they’re using my move. How do you get upset about that? Somebody always does it first. All that is, is basically a compliment saying, like being in the hall of fame, will be remembered forever.”

On not letting the thought of retirement slow him down:

“That’s where – I think that’s the first drop-off. It’s when you start thinking about it, because that’s what happened with Daniel Cormier. There’s no doubt in mind that if DC goes into that fight with no retirement in his mind – and I know he’ll disagree and I know a lot of fans will too, but he doesn’t lose that fight. I don’t think he loses that fight, but I just believe that there’s something that goes off in your head when you see the finish line. It’s not the same thing as if you’re in the race and you sprint for it. It’s different because I think you ease up because you’re not looking to finish for a trophy, you’re not looking to cross that for a trophy or for the next step.”

On wanting a pro wrestling match against Bill Goldberg:

“In wrestling that’s a real easy one for me. It’s Goldberg. I felt that his character meshed well with who I am and he worked pretty stiff. Unfortunately he was in the other in the other company, but I have confidence that one day we can get that one done. I think his style with mine would be a really good match.”

Watch the complete Ken Shamrock interview from The Angle Podcast via the YouTube video embedded below, and make sure to join us here at Wrestling-Edge.com tonight for complete IMPACT Wrestling Bound For Glory 2020 results.