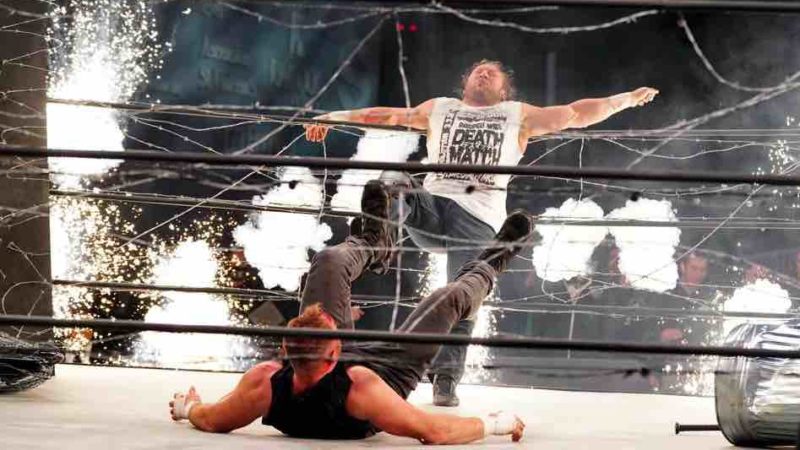 Kenny Omega was justifiably furious at the botched explosion to close AEW Revolution, and it turns out he directed his ire at the people responsible: the third party rigging crew.

FightfulSelect.com report that the third party rigging crew refused to apologize, and the crew essentially ‘brushed off’ the botch. Jon Moxley blamed Impact Wrestling for the botch in a joking manner on Dynamite, saying they ‘paid’ for the bomb.

Tony Khan recently told Forbes about AEW PPV’s going forward, “I think as far as having a Big Four—AEW Revolution, Double or Nothing, All Out and Full Gear—I think we’ve established those are the Big Four events. We have a lot of other huge events, right now a lot of our big specials are being featured on Dynamite or on streaming specials—Fyter Fest, New Year’s Smash, Winter’s Coming, Fight for the Fallen—we’ve developed different relationships with different platforms, but our primary partner is Warner (Media).”

He added, “On the three-day holidays, I think it’s good [to have a PPV on Sunday]. I actually would argue that for Double or Nothing or All Out, a large percentage of the country is going to have Monday off, and in England those are bank holidays so a large percentage of England, people aren’t really working very much. Most people have Labor Day and Memorial Day off here and abroad,” said Khan. CM Punk mocked AEW Revolution on Twitter.

“Double or Nothing, I am strongly considering going to Sunday. All Out I really think it would be really smart to do Sunday because then I don’t compete with College Football and the NFL won’t be going head-to-head. Full Gear I will keep on a Saturday. Revolution and Full Gear, whenever possible, I will do on a Saturday.”

Credit to FightfulSelect.com and Forbes for the two stories.

Eddie Kingston explained that anxiety as he protected Jon Moxley at #AEWRevolution caused everything to go black for him. Moxley and Kingston also joked that Impact Wrestling paid for the explosives. pic.twitter.com/K6lDuJkXOK