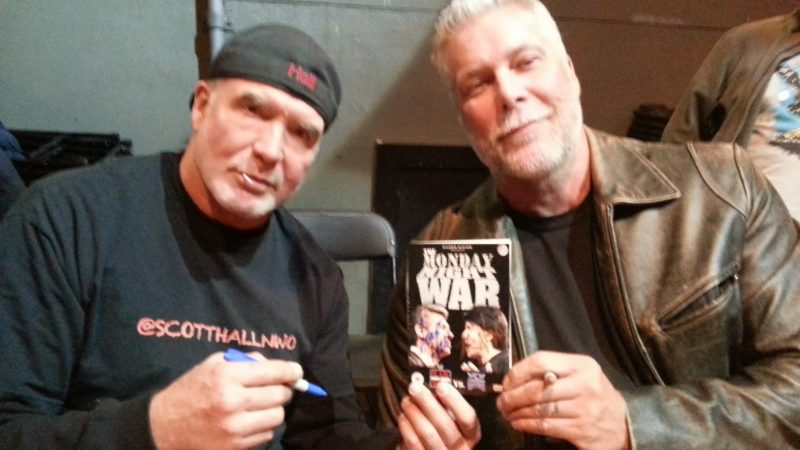 Scott Hall and Kevin Nash were recently guests on the Legends With JBL show on the WWE Network. You can check out some highlights here:

Scott hall on leaving WWE because of money:

“Well, I felt like I’ve never been a mark about, like, winning or losing. I always viewed our business as a team sport and if you need me to block, so the other guy scores, cool, as long as we all get the Super Bowl ring.”

Hall continued, “and at that time, it was a private company, so I went to Vince. I said, ‘hey boss,’ like [JBL] said, I said, ‘is it my ringwork? Is it my mic skills?’ He went, ‘no, no, I’m happy with what you do.’ I said, ‘I’m curious because I feel like my pay has plateaued.’ But I realize, at that time, to Vince, if you make more, it’s literally coming out of his pocket. It’s kind of like, ‘um, no.’ I said, ‘listen, I’m not no mathematician, but I do look at the merchandise statements.’ I said, ‘if we move the decimal point a little bit, would the McMahon family notice it because the Hall family would.’ And he went, ‘nope, nope. Not going to do it. I’ll give you the same thing I give Taker, and Big D, and Shawn [Michaels]. Nope, nope. Not going to do it.’ I went, ‘okay.’ I knew I was going to meet with Vince, so I was prepared. I said, ‘okay, okay,’ because if a fan buys a Razor t-shirt, that’s their money. Can I have more of that?’ ‘No.’ ‘I still want to work for you. Can I go to Japan like 10 – 12 weeks a year and get their money?’ And he goes, ‘well, I’m not going to say ‘no’ because I do let [Bob] Backlund go, but, haha, as soon as I had you over there, I’d need you here!’ And I remember thinking, ‘okay, like ouch, like no.'”

Kevin Nash on why he left WWE:

“I left on the sixth, the sixth of June, and my son was born on the twelfth. And, we’ve done the starving artist. I’m ready to do the signed lithos. I want to get paid. I mean, I go to work to get paid. I’m a Detroit kid. That’s what you do. You’re brought up with that blue collar mentality.”

Hall on the early success of the NWO:

“The night I debuted and came through the crowd, I’m going to give props to Larry Zbyszko. He helped me a lot in the AWA days and he was the one because Bischoff would have had them play ring music and send me down the aisle and I would have done it because ‘anything you want, brother.’ And [Zybsko] went, ‘no, no, he [has] got to come through the crowd. He doesn’t work here!’ And that’s what, to me, made it work. And he said, ‘and when he gets to the ring, he doesn’t beat the other guys up. He just goes to the mic and they stop working because it becomes a shoot.'”

“I just remember thinking, ‘the most recognizable features about my character is my face, so I feel like I own that.’ And then, shortly after all that, the lawsuit went on from day one, but then, when the fake Razor and the fake Diesel debuted, it was pretty much kind of like, ‘okay, like, done deal, like, that’s Razor and Diesel. We’re ‘The Outsiders’.Gene Okerlund called us ‘The Outsiders’, so we didn’t have to have names.”

Hall recalled, “I heard they auditioned guys for it. They used Kane because similar body types and stuff like that. I heard that they made guys audition because you had to do the schtick to be Razor. I felt like Elvis. I felt like I had an impersonator.”

Nash on going by their real names:

“I remember [Eric] Bischoff trying to come up with a name that was kind of like Diesel. I was like, ‘how about, like, Hall and Nash?'”

Nash on the two getting raises:

“We got in this corner booth and they basically just put paperwork in front of us. We had like 30 months when we first came there and now it’s five years. And they’re like, ‘you’re not going to pull this on us.’ And we just sat there and we went [to sign the contracts].”

Nash on the debuts of Fake Razor and Diesel:

“The day they’re going to debut Razor and Diesel and at the back of the TV, the production trucks, there’s a monitor and RAW was on it. So Scott’s standing here. I’m standing here. Bischoff is here. Lambros is here. And the next segment is Diesel and Razor and they’re looking at us, like, waiting for us [to somehow appear on WWE TV simultaneously]. Like, how is this going to happen? Like, is it’s something that’s filmed [in advance] because they still weren’t live. This is one of the taped shows.”