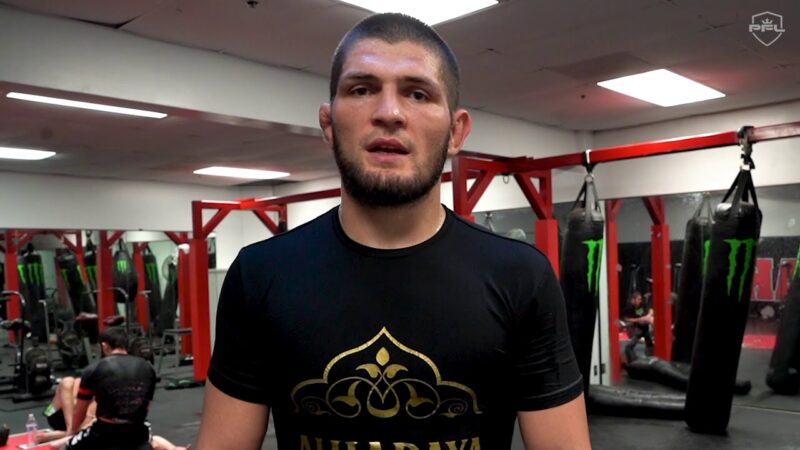 There is no doubt that the retired UFC star Khabib Nurmagomedov looks up to the legendary pro boxer Mike Tyson. ‘The Eagle’ watched the former boxing heavyweight champion dominating his opponents in the ring. Though those visuals of a prime athletic ‘Iron Mike’ made the Dagestan-born professional happy. However, it seems that his in-person interaction with ‘Kid Dynamite’ wasn’t as pleasing as he would’ve liked.


Khabib opens up on Mike Tyson

The undefeated mixed martial artist went to Hotboxin’ With Mike Tyson podcast, where he had a conversation with ‘The Baddest Man on the Planet’ and fellow ex-UFC world champion & Alliance MMA teammate Henry Cejudo.

It was noted that they had a smooth conversation but ‘The Eagle’ had a few demands to be on the podcast. Moreover, he described how he felt bad about meeting his childhood idol.

During an interview for an event, a reporter asked him whether the legendary boxer’s presence intimidated him. The 29-0, ex-UFC athlete replied:

“No, he were not looking through me.” Besides, he said, “I did not like his sight at all.”

The reporter curiously asked the reason and Nurmagomedov responded:

Nurmagomedov and the five-time Ballon d’Or winner Cristiano Ronaldo share a cordial relationship and have met each other occasionally. Meanwhile, Mike Tyson faced heavy criticism for the Khabib Nurmagomedov episode of the podcast. Mike Tyson holds an impressive 50-6 record in boxing. Whereas, the Russian athlete, Khabib Nurmagomedov, was impeccable in his mixed martial arts career. He had a phenomenal 29-0 record.