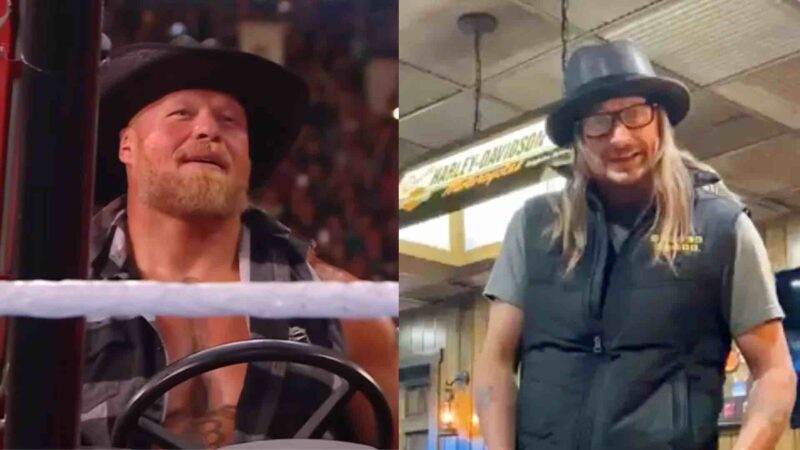 Brock Lesnar and Roman Reigns were involved in a brutal battle in the main event of SummerSlam 2022. ‘The Tribal Chief’ emerged victorious in a gruesome Last man Standing match against ‘The Beast Incarnate.’ Lesnar made his entrance for the match on a tractor. He had also used the vehicle and lopsided the ring, Reigns being inside the squared circle. It turns out WWE RAW commentator Corey Graves had no clue about the insane spot.


Corey Graves opens up on the spot

The latest episode of WWE After The Bell saw Corey Graves and Vic Joseph looking back on SummerSlam in Nashville, including the spot that saw Brock Lesnar lift the ring with a tractor. Graves said he initially joked about it on commentary, but he had no warning that Brock would actually lift the ring during the match.

“Well the good news is, so did I because I’ve never had my life flash before my eyes like I did Saturday night when Brock Lesnar got behind the tractor. We saw Brock make the entrance and I joked that we could see the tractor come into play at some point later on, thinking to myself how absurd is that, that’s never going to happen. Little did I know, Brock would hoist the ring, which is the visual that the entire world even beyond WWE was buzzing about Sunday morning into Monday,” Graves explained, “but what a lot of people may not have seen had they not been paying attention to the downright terror in my voice, was before Brock managed to lift the ring with the tractor.”

Corey Graves noted that ‘The Beast Incarnate’ had initially hit the ring with the scoop of the tractor and pushed the ring instead of lifting it, which caused it to quickly slide towards the commentary table:

“Brock just ran into it and pushed the ring, however many thousands of pounds that ring weighs, pushed it about four feet directly at the commentary desk. Now, I didn’t have a head’s up, nobody said ‘be careful, Brock might kill you’ so I literally — I don’t think my feet touched the ground. I went from a seated position in my chair to the top of the barricade where I nearly spilled out into the WWE fans had it not been for my unlikely savior, WWE Hall Of Famer Kid Rock,” Graves explained, “who was seated almost directly behind me with one of his lady friends. Luckily they stopped me from crashing on the back of my head from bumping into the crowd because I was horrified at watching the ring,” Graves explained. “That’s like pushing a building really fast, directly at Michael Cole and myself. Man, that whole match was a free-for-all.”

During the closing moments, Reigns and The Usos had attacked Lesnar. Lesnar popped up every time he was knocked down to everyone’s shock. He was put under a pile of tables, chairs, and steel stairs that prevented him from making it to his feet. The show ended with Reigns holding his titles high and the medical team checking on Lesnar at ringside.