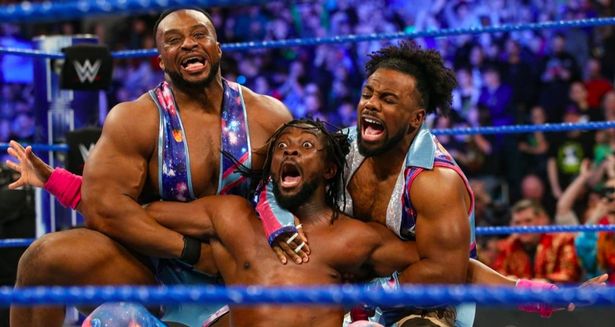 Wrestlemania is two weeks away and on this week’s Smackdown Live, a huge match was made official that certainly pleased fans.

The New Day came out to start SmackDown Live this week, acting like they were done with the company. Big E said that he and Kofi talked about walking away and only Vince McMahon could change their minds.

Then Vince McMahon came out and so did Daniel Bryan afterwards. He told McMahon to let them quit. However, Vince then booked a tag team gauntlet match for later on in the show. If The New Day managed to come out on top, Kofi would get a WWE Title shot against Daniel Bryan at Wrestlemania.

The New Day made short work of Karl Anderson and Luke Gallows and also defeated Rusev and Shinsuke Nakamura next. However, The Bar gave them a lot of trouble and they also put Big E through a table after they were defeated.

When it was The Usos turn, they didn’t face The New Day but instead forfeited their spots since they felt that Kofi Kingston deserves the title shot at Wrestlemania.

Finally, Eric Rowan and Daniel Bryan came out and tried to take advantage of the situation, but The New Day managed to overcome all the odds.

The match ended after Big E pinned Rowan under a table and Woods took out Daniel Bryan with a DDT off the apron. The referee made a 10 count and so The New Day were victorious. Kofi Kingston earned his chance at the WWE Title at Wrestlemania.