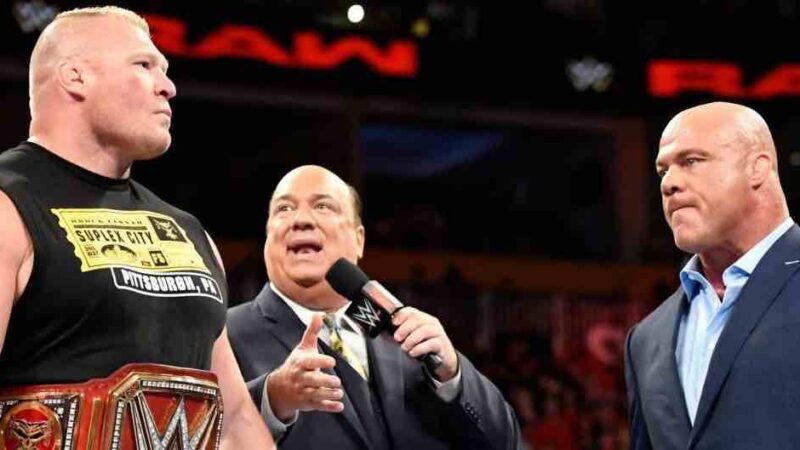 Brock Lesnar and Roman Reigns are once again set to collide inside the squared circle as fans are thrilled about it. ‘The Beast Incarnate’ made a shocking return on a recent edition of Friday Night SmackDown and sent a statement to ‘The Tribal Chief’ after hitting an ‘F-5.’ It transpired after Reigns successfully defended his Undisputed WWE Universal Championship against Riddle. A WWE Hall of Fame recently pitched an idea that would help Lesnar. WWE also revealed a poster featuring Lesnar. It seems WWE Hall of Famer Kurt Angle is not a fan of the match taking place several times.

Kurt Angle opens up on the match

Kurt Angle was in a conversation with NBC Sports, where he answered some questions about WWE. They asked him about WWE finding it hard to find someone of the same caliber as Brock Lesnar. Angle also expressed wanting to see Roman Reigns face some new opponents rather than ‘The Beast Incarnate’:

Roman Reigns, he needs to wrestle some new talent, some NXT guys, upcoming talent that are very talented, that can match his skill. I have nothing against Brock Lesnar coming back and wrestling Roman Reigns again but it’s already been done, and you don’t want to keep doing that over and over again. You have to make new talent.

The WWE Hall of Famer also reflected on AEW, and how they use talent from WWE when WWE won’t give them the platform they need. He added that WWE also has a habit of going back to known faces:

“I think that has a lot to do with the other promotion starting to get some momentum behind them — AEW. You know, WWE lost a lot of talent to them. They’re looking at their NXT guys and they’re going to start making those guys pretty soon. I think that they do have a habit of going back to the older guys like Brock Lesnar.”

Reigns and Lesnar will once again go head to head in a Last Man Standing match for the Undisputed WWE Universal title at WWE SummerSlam Premium Live Event on Saturday, July 30.