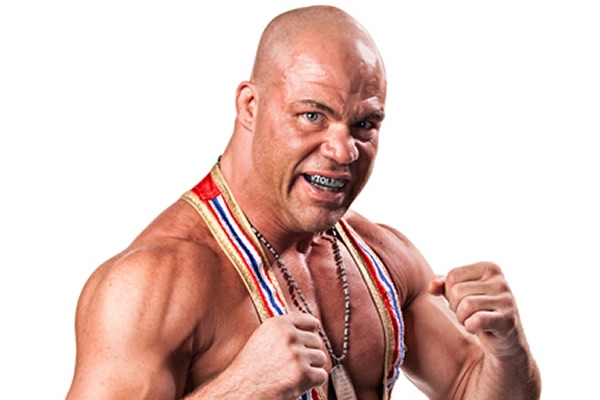 Former WWE and TNA star Kurt Angle recently did a Q&A on his Facebook page. Here are the highlights.

What was your reaction to Sting announcing his retirement at the WWE Hall of Fame ceremony?

I think we all knew it would come eventually. I’m glad he was able to step into a WWE ring. He sealed his legacy as one of the very best ever!!!!

Do you have plans to show up in WWE Hall of Fame..we guys were talking about our favorite superstars, and we remembered you? Any future expectations?

I don’t know. I don’t control what WWE does and doesn’t do. It would be an honor to be inducted, but I’m not expecting anything from anyone. I’m taking my break one day at a time. This year is MY year off. Yippee!!

My question is what is your favorite era in the WWE smile emoticon Attitude Era or Ruthless Aggression Era?

Hitting the tail end of the attitude era was lots of fun. Lots of comedy. But, the ruthless era was great too. That’s when my character changed into more serious mode. I loved them both but Austin and Rock and HHH were so much fun to work with in the Attitude Era.

Hey, what was your weirdest road story or smallest venue you have ever wrestled in?

Weirdest road story? If you haven’t heard about it, it’s when Vince McMahon kept trying to wrestle me on a chartered plane. 4 hours of pure hell. He wouldn’t stop. All I wanted to do is sleep. Vince never sleeps. Lol.