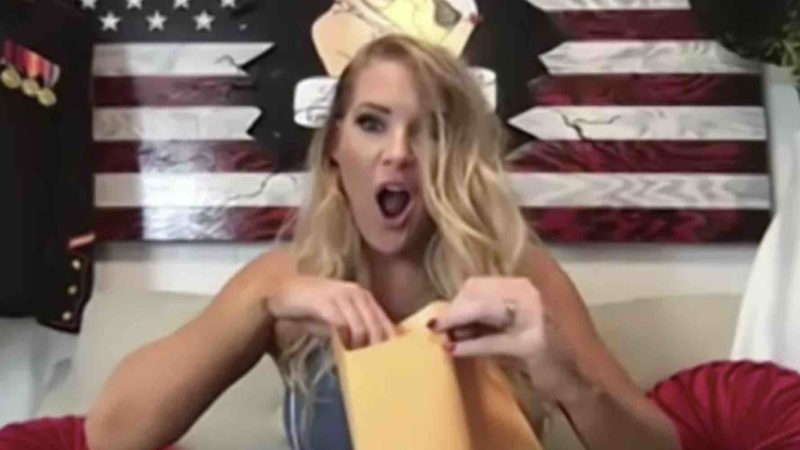 Lacey Evans took to social media via Twitter to respond in emotional fashion to a tweet by her contemporary Natalya, who congratulated her on being a mother and making history in WWE. Natalya tweeted how honored she was to face Evans in the ground-breaking and trail-blazing first ever women’s match at WWE’s Crown Jewel Pay-Per-View that took place in the Kingdom of Saudi Arabia, which was bombshell news at the time. Natalya tweeted the following out. This Lacey Evans pregnant backside Photo was just revealed

Being part of the first ever women’s match in Saudi Arabia makes me proud. I’m honored to have shared that with @LaceyEvansWWE – a mom & Marine. Visit http://bit.ly/3alJEw0 & join @thefanprojectco to keep creating moments in women’s sports that inspire us. #SheDidThat

Which gathered this reaction from ‘The Sassy Southern Belle’ and future two-time mother, Lacey Evans, who thinks pregnancy hormones drove her to cry – “is it too early to blame these tears on these hormones?!! I love you @NatbyNature”.

Lacey Evans announced her pregnancy during this past week’s edition of WWE Monday Night Raw. Evans was tagging with Peyton Royce and without even entering the ring, the apple of Ric Flair’s eyes went to the ramp to announce to the entire WWE audience that Charlotte Flair, who was tagging with Asuka, would not be putting her hands on her tonight because she is pregnant. Although Evans’ pregnancy has been written into storyline, it should be absolutely made clear that ‘The Sassy Southern Belle’ and top WWE female superstar is legitimately pregnant and the father is her long-time partner and high school sweetheart, Alfonzo.