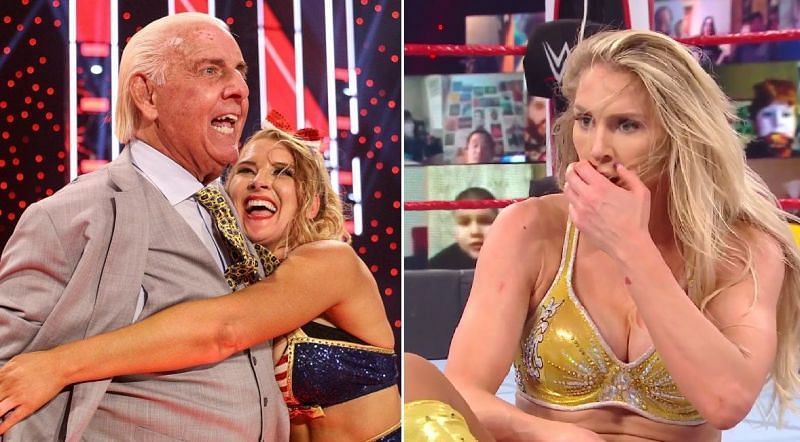 WWE seems to have paired up Lacey Evans and Hall-of-Famer Ric Flair in a romantic angle. Now Lacey Evans is “coming after” the ‘Flair’ nickname, she said on Twitter during tonight’s episode of WWE RAW.

It started on RAW Legends Night where Ric Flair accompanied his daughter Charlotte Flair to the ring for her match against Lacey Evans. Instead of coming to his daughter’s aid, he helped Lacey to win the match by tripping Charlotte.

Charlotte asked him to stay out of her business, but the same thing happened next week as well. Ric Flair interfered in Charlotte’s match with Lacey and helped the latter to win. However, this week Lace took things a bit too far.

On tonight’s episode of the Red Brand, Charlotte was going up against Lacey’s tag team partner, Peyton Royce. Lacey was seen backstage walking arm-in-arm with the ‘Nature Boy’ ahead of the match.

During the contest, Lacey not only walked out with Ric Flair to his music, but also donned one of his signature robes, mimicking his entrance. Lacey’s antics distracted Charlotte, but this time she did not let it get better of her. She submitted Peyton Royce with the Figure 8 and took her time with the move, making Peyton suffer even after she tapped.

Following the win, Charlotte Flair spoke backstage and addressed what Lacey Evans has been doing. In essence, she said that she completely understands what Lacey is doing – trying to use her father’s surname to climb up the ranks in WWE – but she will never be ‘The Queen’.

“She can wear my dad’s robe, but she can never wear my crown.’

"@LaceyEvansWWE can wear my dad's robe, but she can NEVER wear my crown!" – @MsCharlotteWWE#WWERaw pic.twitter.com/AYZMDABbmO

In response to Charlotte’s comments, Lacey Evans mocked her and said she had no intention of taking her crown, as she was coming after the ‘Flair’ surname first.